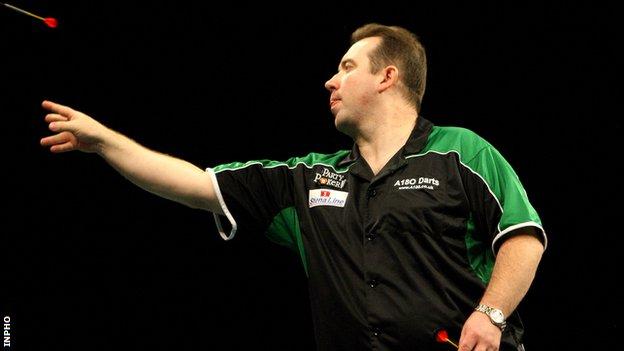 Fermanagh man Brendan Dolan crashed out of the PDC World Championship after suffering a second-round 4-1 defeat against Scotland's Gary Anderson.

2011 finalist Anderson scored more heavily throughout the contest and wrapped up victory in the fifth set.

Anderson won the opening three sets and missed a number of doubles to close out the match in the fourth set.

However, the Scot regrouped to take the fifth set with his 97.97 match scoring average ultimately proving the difference despite his difficulties with finishing.

Anderson, who celebrated his 43rd birthday on Sunday, only managed to hit 14 out of 35 doubles in the match which represented a 40% success rate.

Belcoo man Dolan's scoring average was 90.1 and while his finishing percentage of 53.85 was better than the Scot's, the Northern Irishman's struggles with scoring proved his undoing.

In addition, Dolan's best checkout was a paltry 65 as he again was unable to get beyond the last-32 stage at Alexandra Palace.

Anderson's win sets up a last-16 meeting with either Michael van Gerwen of the Netherlands or England's Kevin McDine.

Dolan had progressed to round two by beating England's Colin Osborne 3-0.