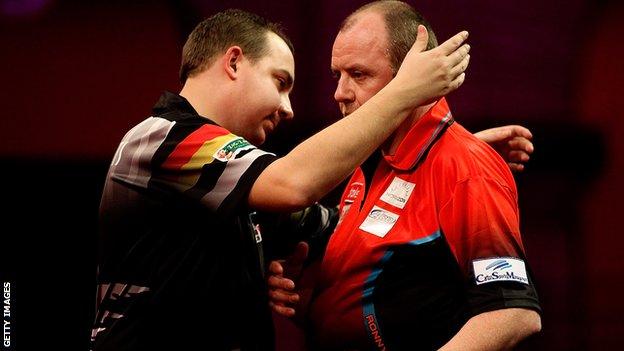 Kim Huybrechts came out on top in the battle of the Belgian brothers as he and Ronny made history in the first round of the PDC World Championship.

Siblings had never previously met in the tournament, and it was Kim - the younger by 20 years at 28 - who went through after a tense 3-1 victory.

Ronny took the first set 3-1 after a 13-dart finish and was 2-0 up in the second before the momentum shifted.

He told Sky Sports: "That was the toughest game I have ever played in my life.

"Ronny was by far the better player - I got lucky but I don't feel good.

"I don't think I have ever been this nervous - I can promise the next round will be 10 times better."

Devon Petersen enjoyed a 4-1 qualifying win over Mohammed Latif Sapup and followed that up with a 3-1 victory over 1996 world champion Steve Beaton to go through to round two.