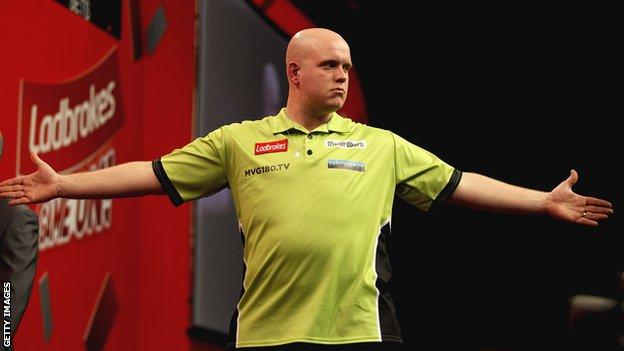 Michael van Gerwen's rise from 'promising youngster with potential' to 'darting phenomenon' has been almost as speedy as one of his visits to the oche.

Following a remarkable 12 months, he lies second in the Professional Darts Corporation Order of Merit and has developed an army of fans who sport his trademark lime green shirt at events all over the world.

People like to see games with high scoring and high finishing. Me and Phil, at the moment, are spectacular to watch

The and Premier League titles sit proudly in the trophy cabinet, while to his growing collection of silverware earlier this month.

While 16-times world champion Phil Taylor remains the undisputed king of darts, van Gerwen is being tipped to become his successor as the dominant force.

But does the man himself feel he can emulate the achievements of the greatest player ever?

"There's never, ever going to be someone like Phil Taylor," van Gerwen told BBC Sport.

"The standard is so high. With Phil, Raymond van Barneveld, Adrian Lewis, James Wade, Simon Whitlock and myself, you have a lot of top players and they all can beat each other."

And the 24-year-old has proved he can beat the best, defeating Taylor to seal Premier League glory in May, four months after the

"We always have good games and they're always very close," added van Gerwen, who takes around four seconds to complete a visit to the board.

"It's good for darts. People like to see games with high scoring and high finishing. Me and Phil, at the moment, are spectacular to watch."

He may be on top of his game right now, but it has not always been this easy.

Aged 17, a fresh-faced van Gerwen won the 2006 BDO World Masters to become the youngest champion of a major darts event.

A move to the PDC, the substantially more lucrative of the two darting bodies, followed shortly afterwards.

Although there were sporadic glimpses of his undoubted talent, there were also fears he would never hit the heights expected of him after his initial breakthrough.

"I needed confidence. That's very important in darts," he explained.

"When you win games or you win a tournament, you get your confidence back.

Grand Slam of Darts, November 2012: Beats Phil Taylor on the way to the final, where he is narrowly beaten by Raymond van Barneveld.

World Championship, January 2013: Hits nine-dart finish in semi-final win over Wade and almost repeats the feat in the very next leg, missing a dart at double 12. Races into a 4-2 lead against Taylor in the final, but Taylor recovers to win a record 16th world title.

Premier League, February-May 2013: Ends the 14-week league section top of the table, the first player other than Taylor to do so in the competition's nine-year history. Beats Taylor 10-7 in the final to win the event on debut.

"People told me all the time that I had a lot of talent, but it's not only about talent. You need to be so mentally strong, otherwise you won't make it."

His spectacular nine-dart finish against Steve Beaton at last year's World Matchplay in Blackpool could have been another false dawn, but instead it has proved to be a seminal moment and the start of an amazing purple patch.

"It was a brilliant tournament for me," van Gerwen recalled.

"For me, it all started at the 2011 Grand Slam of Darts, where I reached the quarter-finals, and then the last 16 of the Worlds.

"Before the Matchplay I had a couple of Pro Tour wins and that made me confident for the Matchplay. I got to the quarter-finals and hit a nine-darter - what more could you ask for?"

Now van Gerwen is set to return to Blackpool, where his renaissance started, and will begin the 20th World Matchplay as favourite to win the event.

He is sure to receive a magnificent welcome from fans when he enters the Winter Gardens to the strains of 'Seven Nation Army' by the White Stripes.

"A lot of people said I needed to change my [entrance] number," said van Gerwen, who on Sunday evening.

"I asked Sky for a new walk-on song, they chose this one for me, and I think it's brilliant. Everyone loves it.

"I've had a lot of great support. If you look back to the Premier League, it was so amazing to be on stage when everyone is cheering your name.

"I always want everyone to enjoy it. If I win, I enjoy it myself, but everyone is buying tickets and I want them to have a good day as well."