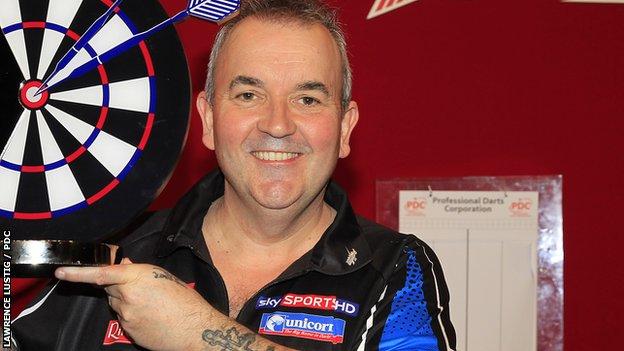 Phil Taylor clinched the UK Open title for the fifth time in his career as he beat Andy Hamilton 11-4 in the final at the Reebok Stadium in Bolton.

"I've proved to myself I can still win a major tournament, which is fantastic," said Taylor.

Both finalists were from Stoke and Hamilton, who was aiming to win his first major tournament, took the opening leg, but that was the only time he held an advantage.

Taylor, a 16-time world champion, won eight out of nine successive legs to take control in the final on his way to the victory and the £40,000 winner's prize.

However, he nearly did not make it past the last 16 as he had to fight back from 8-7 down to beat Northern Ireland's Brendan Dolan 9-8, before defeating Michael van Gerwen of the Netherlands in the quarter-finals.

A total of 146 players started in the competition and Suffolk-based Peter Wright, who has a yellow and green mohican haircut and a tattoo of a snake on the side of his head, was a surprise semi-finalist, but lost 10-5 to Taylor.

Hamilton had beaten former UK Open champions van Barneveld and James Wade on his way to the final and was determined to win a big competition in the near future.

"It's been a great week for me and I'm very proud to get to the final," Hamilton told Sky Sports. "I want to win a major and will keep trying and trying."