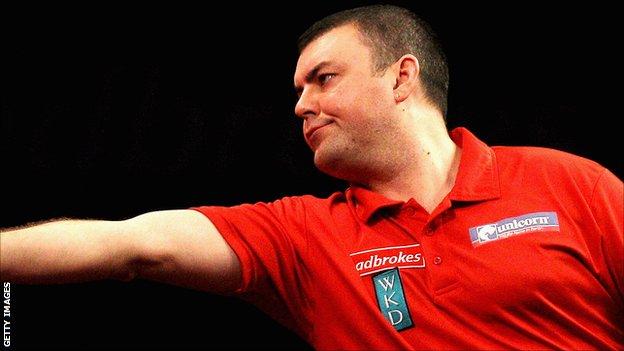 The 19th World Matchplay gets under way in Blackpool on Saturday and the home crowd will be hoping a local hero can lift the gloom of this damp British summer.

Players will come from as far afield as Belgium, the Netherlands and Australia to compete for one of the most prestigious titles in darts.

But there would be few more popular winners of the £100,000 first prize than Blackpool-born Wes Newton, who is now based a few miles along the Fylde Coast in Fleetwood.

"I used to go every year as a kid," he told BBC Sport. "You say to yourself 'I want to be up there one day' and I've achieved that.

"To walk out there for the very first time was unbelievable.

"The atmosphere is absolutely fantastic. The venue is part of that because it's not long but it is wide, so the crowd are rammed in right behind you and almost on top of you.

"There's no travelling. I'll be staying at home so I won't be stuck in a hotel, plus I'll hopefully have the crowd cheering me on. A lot of friends and family will be there on my side."

Newton does not have the best of records at the Winter Gardens - his first four Matchplay appearances ended with first-round defeats.

"I kept getting beaten in the first round, but eventually I learned to treat it as another tournament and to stop trying so hard there," continued the 34-year-old. "The World Championship is the biggest one but, to me, this tournament is a close second.

"I like the matchplay darts where it's just first to 10 legs. You know what's what. In a set situation, you can keep winning legs and losing sets."

He has to wait until Tuesday evening for his first-round match against Norfolk's James Hubbard, a young player who has impressed on the darts circuit in recent months.

"James is a very talented player and this won't be his first time on the big stage either," added the world number five. "I won't be underestimating him.

"He's done fantastic things this year and it's going to be a very tricky game for me."

A possible semi-final opponent for Newton is Taylor, who has won the last four World Matchplay titles and a record 12 in total.

The 15-time world champion will be looking to bounce back from a shock defeat by Robert Thornton in the final of the UK Open in Bolton last month.

"Phil is head and shoulders above everyone else but I think everyone else is catching him up," said Newton, nicknamed 'The Fleetwood Warrior'.

"In the last few years, he's probably not won as many majors as he would have probably liked to. It gives you great confidence knowing that he has been beaten and he can be beaten."

After a consistent couple of years, the highlight being a run to the final of the 2011 UK Open, Newton has risen steadily up the world rankings.

But despite now finding himself among the darting elite, Newton remains one of the quiet men of the sport, rarely seeking the limelight and happy to let his darts do the talking for him.

Winning a first major title will change that.

"I've just gone quietly about my business and I've got to take the next step now, which is not just getting to a major final, but going on and winning one," said Newton.

"I've got up to number five now, while means I'm right up there with the best. But to be a real household name, you probably need to win a major."