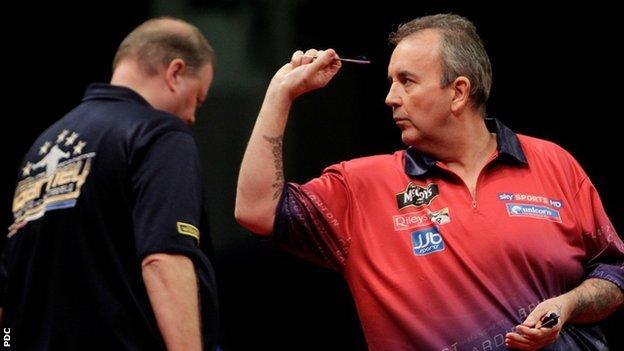 The 15 times world champion took four straight legs to seal the game after the Dutchman missed eight darts at a double to level the game 4-4.

"There was a lot of pressure on Raymond and you can feel that with all the players because they're fighting for play-off places," Taylor said.

"If he'd hit that double it would have been a tense final few legs."

Taylor is now seven points clear at the top of the table with four rounds to play and his victory in Sheffield was his ninth in a row.

Defending champion Gary Anderson saw his hopes of retaining the £150,000 title take a blow as he picked up just a single point from two games.

The Scotsman drew 7-7 with Andy Hamilton and suffered an 8-3 defeat at the hands of third placed James Wade.

Anderson now finds himself down in sixth, three points behind van Barneveld in the final play-off place.

In the night's other game, Simon Whitlock strengthened his grip on second place with an 8-5 win over Kevin Painter.