Whether it's television shows, clothes or music, we can all think of stuff out there that's so bad, it's good.

The American team is no stranger to colour schemes and concepts that are a little, um, 'out there' - given that their day job kit is fluorescent pink. But this one? Just... wow. 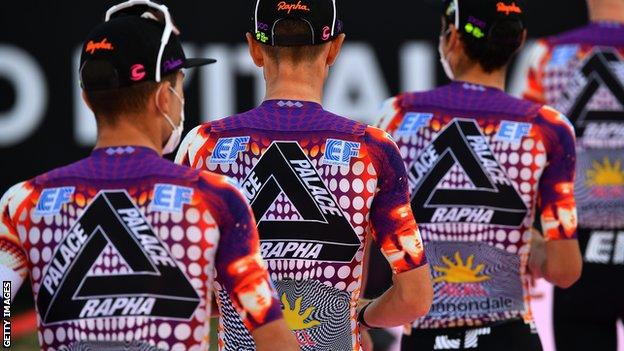 The leader's jersey of the current Tour of Italy, known as the maglia rosa, is pink. So teams with similar schemes are often encouraged to change their kits.

Keen to do things more than a little differently, EF decided to produce what can only be described as a psychedelic graphical explosion - complete with duck.

And the coup de grace: time trial helmets shaped like a duck's bill.

The reaction has been inevitably mixed in the cycling community and beyond. But it appears to be too much for cycling's world governing body the UCI, who have fined the team 500 Swiss francs for each competing athlete - a total of £3,358.80 - for "non-compliant clothing".

Naturally, EF team boss Jonathan Vaughters - a colourful and charming character in his own right - was thrilled, responding sarcastically on Twitter: "Oh @UCI_cycling you guys are always looking out for the best interest of the sport, aren't ya? Thanks for the $4,000 of fines for wearing our crazy ducks. Hope [UCI boss] @DLappartient enjoys his dinner on us! Salud!"

"All jerseys must be submitted to the UCI in their final version for approval in accordance with article 1.3.036 of the UCI Regulations, including in the case of a temporary change of jersey for an event," the UCI said in a statement.

"The EF Pro Cycling team displayed a different jersey than the one previously submitted to the UCI during the presentation of the teams for the Giro d'Italia 2020. The team was then invited to regularise its situation by the UCI, which allowed it to start the race with this jersey."