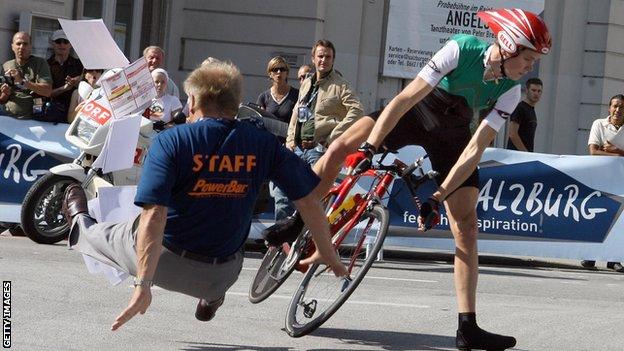 Back in 2006, at the beginning of Chris Froome's career, he came to a fork in the road on the Road World Championships time-trial course, seconds after he rolled off the ramp.

Uncertain of which way to go, he hesitated and went straight on, piling into a race delegate. Both ended up in a heap on the tarmac, the innocent party's paperwork flying into the air.

It was an inauspicious start to what has become a glittering career.

Fourteen years later, and there's another fork. Another decision to be made. The noise about a possible move away from Team Ineos has never been louder.

That moment of clumsiness in 2006 seems unbecoming of a fearless and innovative racer, but things go wrong when people are in a hurry.

And he could be in a rush again now.

"My dream is to win more Tours than anyone," the 35-year-old told L'Equipe in April. "It would be the perfect scenario, but I know there is still a lot of work to make it come true."

But leaving the team which has powered him to all of his seven Grand Tour victories could be riskier than a 90kph descent while balancing on a top tube.

The newly formed Israel Start-Up Nation appear to be favourites to draw Froome away - to match or better his annual salary of about 5m euros (£4.5m) and make him the single focus of their attempt to win the Tour.

That sounds fine, but it's no easy task to embed a new team leader.

"Often the biggest challenge can be something as simple as language," said the boss of one World Tour team.

"If the riders have trouble communicating, it can take a bit longer to settle in."

It has been a year since Froome crashed before the Criterium de Dauphine warm-up race and sustained terrible injuries. But that, coupled with team-mate Egan Bernal's Tour win, appears to have changed Froome's mindset.

During the 2018 Tour he ceded to Geraint Thomas to aid his long-time friend, and longer-time domestique, to victory - based on the meritocratic philosophy of Team Sky/Ineos; whoever has the better form going into the decisive part of the race would get the team's backing.

It is a philosophy the team have made work better than any other, but backslaps and congratulations can't forever hide what someone can feel when giving up such an accolade.

But Froome has been the darling of only his second team since he came to Europe from Africa in 2008. Does he really know any different?

A time to fly

Froome is still the boss, isn't he? What could be the reason he would feel that status slipping through his fingers?

Bernal. The Colombian is media-trained enough at 23 not to admit it, but he won last year's Tour at a canter. That bizarre summer snowstorm did not assist his maiden Grand Tour victory - more sheer performance in reserve. Oh, and it was his second three-week race ever.

And he has made it clear he has no intention of standing aside to lose out on another Tour victory to a team-mate.

"I've already won one, and I'm not going to throw away an opportunity to win another," he said. "That I would sacrifice myself being at 100%… I don't think I'm going to do that, nor will anyone."

A lot has been written in recent weeks about Froome's potential departure. Something - or someone - appears to have rattled his cage.

"I am ready for the Tour and to be a leader," he said recently. "The important thing is the team wins, that's what matters. The road will decide the rest." He did add, though, that he wasn't sure how the team would manage its ambitions with three team leaders.

Froome knows Thomas, and has beaten him several times. He will believe he will always be capable of beating him again. Less so Bernal, perhaps.

Status in road cycling is based strongly on reputation and certain signposts of strength.

Thomas, for all his hard work, has cracked before in Grand Tours in the mountains. Froome never truly blows up on the climbs. And last year's Froome-less Tour showed Bernal - consistent, unspectacular, patient and showing almost no pain in the high mountains - is a version of Froome. Only with time on his hands.

Twelve more years, to be exact.

It would be disrespectful to say Froome would be running scared of a less experienced rival. But it is disconcerting to see a younger version of yourself with so many of your qualities - in any walk of life, let alone a sport with such brutal demands.

"If a rider is giving his best then you accept it, support them but also re-align your goals and consider your options," says the aforementioned general manager.

"Modern cycling is about being versatile and not relying only on one rider. Before you had a team leader who was much stronger than all his domestiques. Nowadays, the margins are much smaller and everyone at the top level is stronger."

If it does take months or even years to dial yourself into a new team, but your 23-year-old rival is already winning Grand Tours in 'your' team, then time - and the odds - can seem to be against you.

Ultimately, no-one knows which way is best for Froome: Stay or go? Left or right? He has to work out what is best for him.

For fans of Britain's most successful cyclist, let's just hope he doesn't end up off the bike facing a pile of paperwork.