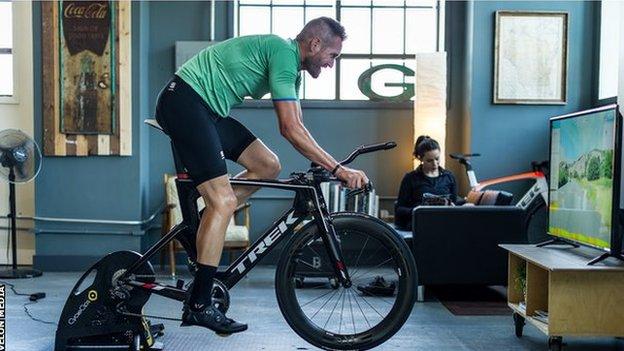 From Wednesday, the BBC is showing the Digital Swiss 5 - the latest virtual cycling race - with 19 teams taking part in a mini-Tour de Suisse.

It's road race cycling, only with team members respecting social distancing rules by riding the course at home on their training bikes instead of bunched in a peloton.

This year's Tour de Suisse has been cancelled, so this is as close as the riders will get to riding the event until 2021.

What is The Digital Swiss 5?

Each day, three members of each team - selected by the teams themselves - will join the course on their monitors and ride the course in real time for an hour.

As the profile of the course goes uphill and downhill, the training bike automatically applies more or less resistance to the pedals.

The race routes are a mixture of flat, hilly and mountain profiles and are taken from actual videos of the Tour de Suisse.

There are 19 teams in the race and you'll have heard of most of them - Ineos, Quick-Step, Mitchelton-Scott, and AG2R are all there.

There are some big-name cyclists too - the main British names are the Ineos trio of Ben Swift, Luke Rowe and Ian Stannard, while Ireland's Nicholas Roche of Sunweb is also racing.

Denmark's world champion Mads Pedersen and reigning Olympic champion Greg van Avermaet of Belgium are also set to be involved with all five races being shown on the BBC Sport website.

There are two climbs with the first much tougher than the second. Despite the shortness of the race, the riders will ascend 1,192m in total.

Four laps of an 11.5km circuit around the town that will host the start of the 2021 Tour de Suisse. There are a couple of short, sharp inclines on each lap but with only 180m of cumulative climbing, this should be a day for the sprinters.

A benign start to the race will see the riders tackle a relatively flat opening 20km. But then the feared Nufenenpass kicks in. It is the highest road pass in Switzerland, and the summit finish at 2,478m means the riders must climb more than 1,000m in altitude over the final dozen kilometres. If you fancy your chances, there is a 'fan race' right after the professionals have had a go.

The fearsome Schallenberg mountain is the first of two climbing tests but the second half of the race is downhill so expect a fast finish into Langnau.

The first 15km is all uphill, over the Lukmanier Pass, which tops out at 1,975m. The following 15km are down the other side but riders will need to reserve a little energy for the kick up to the finish in the final six kilometres.

How do the cyclists feel about it?

Belgium's Greg Van Avermaet, who won the virtual Tour of Flanders, said: "After my first taste of virtual racing a couple of weeks ago, I'm interested to see how I go.

"Virtual racing is definitely not easy. The races may be much shorter than normal races but the effort is much more intense and you have a much smaller window of opportunity to make the difference when it comes to tactics."

World champion Pedersen added: "Normally, I don't like to spend time on my home trainer but right now, I actually enjoy it. It's really nice that we can race against each other while keeping our distance."