Geraint Thomas has been taken to hospital after crashing out of the Tour of Switzerland during stage four.

Team Ineos said the 33-year-old suffered "abrasions to his shoulder and a cut above his right eye".

"We'll wait until they properly check him and then we'll know more. I'm no doctor but he looked OK," added Team Ineos sports director Gabriel Rasch.

Rasch confirmed that Astana's Andrey Zeits had crashed in front of Thomas, causing the Welshman to hit the deck.

Thomas was able to sit up and talk to team-mates before being taken away in an ambulance.

He has been expected to lead the team at the Tour de France since Chris Froome's crash at the Criterium du Dauphine last week.

There were fears immediately after the crash of a possible broken collar bone, but they were calmed by the sight of Thomas moving both of his shoulders while being treated.

Team Ineos tweeted Thomas "was alert and speaking to the team" immediately after the incident.

Rasch said the Welshman had wanted to continue riding, but the team doctor made the decision to send Thomas to hospital.

Ineos team-mate Froome, a four-time Tour de France winner, is expected to be out for at least six months after suffering a fractured neck, fractured right femur, broken hip and fractured ribs in his crash last week.

The 34-year-old Englishman was the lead rider for Team Sky - now Team Ineos - at last year's Tour de France before Thomas earned the support of his team as he closed in on victory in the final stages.

Elia Viviana won Tuesday's stage of the Tour of Switzerland following a sprint finish. Sagan finished just behind him in third and retains the overall race lead. 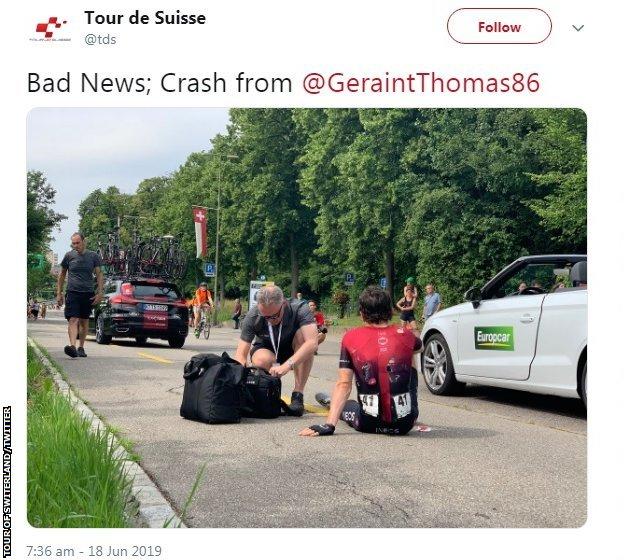