Britain's Lizzie Deignan finished in the pack in the opening stage of the women's Tour de Yorkshire as Dutch rider Lorena Wiebes won in Bedale.

Ex-world champion Deignan was racing in Britain for the first time since the birth of her daughter in September.

Wiebes won the sprint finish on the 82-mile first stage from Barnsley, with Christine Majerus second and Alison Jackson third in rainy conditions.

Britain's Lizzy Banks claimed the Queen of the Mountains jersey.

Banks, who initiated the day's breakaway, finished ahead of fellow Briton Leah Dixon on the only climb of the stage.

Deignan, 30, came into the race on the back of three iconic one-day races where she finished seventh in last week's Liege-Bastogne-Liege, 23rd in the Amstel Gold Race and 21st in La Fleche Wallonne.

Yorkshire-born Deignan is 10 seconds behind Wiebes - who holds that advantage over most of the field after picking up 10 bonus seconds for winning the stage - in 26th after the first of two stages, with the second going from Bridlington to Scarborough on Saturday.

"Actually I struggled," said Deignan. "It's all about getting those races in, getting my race rhythm.

"I'm still so eager to get going and I'm finding it boring I can't attack like I used to but that will come back a couple of races down the line." 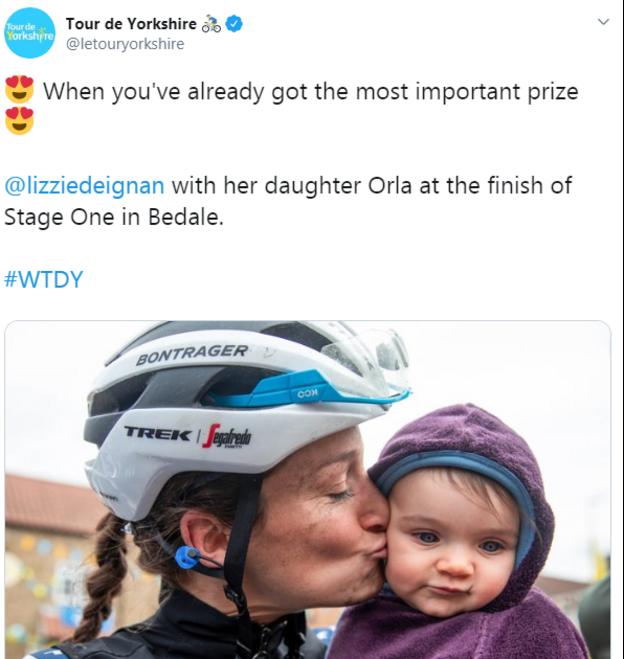 After a cagey opening which saw numerous riders' attempts to break clear foiled, Banks and Dixon stretched out a two-minute lead over the peloton before being caught by a four-woman chasing pack.

But the group, which included Kelly Murphy, Lauren Kitchen, Ingrid Lorvik and Maria Confalonieri, were gradually reeled in as they approached Bedale for the expected bunch sprint finish.

The peloton swept up the break with two miles remaining and Parkhotel Valkenburg sprinter Wiebes came round Majerus with around 200m remaining to race clear and win by a couple of bike lengths.

"My team-mates did a really good job," Wiebes told ITV. "I was put in a perfect position behind Majerus and I waited until 200m and then just went.

"I felt good during the race, I hope that we can change the leader's jersey to [team-mate] Demi Vollering tomorrow."

This year's race includes many of cycling's big names because it incorporates part of the route for September's World Road Race Championships.

Reigning Olympic and world champion Anna van der Breggen and Marianne Vos, who has three world titles, both finished in the pack.

Cyclists rarely get the chance to race on a world championship course in advance, but Tour de Yorkshire competitors could scope out part of the circuit in Harrogate that will be used in September.

The end of the second intermediate sprint, which was won by Australian rider Kitchen, will be the finish line for the World Championships.

"I've been doing it wrong in training so I'm glad I actually saw the proper course," Deignan added.

"Just the final couple of corners, I came at it from a different angle. The main points I've been doing properly. It's a good circuit, I like it."

The second stage of the men's Tour de Yorkshire follows the same Barnsley to Bedale course and starts at 14:45 BST on Friday.

General classification after stage one: