World champion Peter Sagan surged late to secure his third victory of the 2018 Tour de France in a bunch sprint finish on stage 13.

Sagan, who also won stages two and five, kicked from deep to edge out Alexander Kristoff and Arnaud Demare on the line in Valence.

The Slovak also extended his already-dominant lead in the green jersey points classification.

This was a relatively calm day for the general classification favourites after three tough days in the Alps, with four-time winner Chris Froome also finishing safely in the bunch to remain one minute 39 seconds behind Thomas in second.

"This stage was a piece of gold for us," said Sagan. "Everyone in the group recovered and I think everyone is happy it was a relaxed stage.

"I was a bit late, a little bit behind in the last 600m but I stayed on the wheel of Kristoff and I'm very happy to beat them."

This stage presented an excellent chance of a rare win in a Tour sprint finish for several riders, after the Alps had wiped out most of the race's fastest and most successful sprinters, only for Sagan to again prove his remarkable qualities.

Mark Cavendish and Marcel Kittel were eliminated after missing the time cut on stage 11, while Andre Greipel, Fernando Gaviria and Dylan Groenewegen all abandoned on stage 12. Those five have 60 Tour stage wins between them, with Gaviria and Groenewegen having won two each this year.

Groupama-FDJ, UAE Team Emirates and Bora-Hansgrohe duly rode on the front all day, in service of Demare, Kristoff and Sagan respectively, to ensure the four-man breakaway of Thomas de Gendt, Dimitri Claeys, Tom Scully and Michael Schar never got too far ahead.

When Schar attacked from the break late on, the peloton calmly reeled him in with 6km to go to set up the bunch sprint, only for Quick-Step Floors' Philippe Gilbert to launch a powerful counter-attack.

FDJ caught the Belgian with 400m to go and fittingly it was Demare who took up the sprint, with Kristoff kicking alongside at the Frenchman faded.

But neither could hold their effort for long enough, with Sagan showing exquisite timing to pass both and claim his 11th Tour stage victory.

The versatile Slovak, who won a sprint on stage two from a reduced bunch and an uphill finish on stage five, had finished no lower than third in this edition's previous bunch sprint finishes, and then only behind riders that are no longer in the race.

He now leads Kristoff by 228 points in the points classification and is set to equal Erik Zabel's record of six green jerseys should he complete the race.

Can the break make it on stage 14?

Saturday's stage 14 runs 188km from Saint-Paul-Trois-Chateaux, with the potential for a breakaway to go the distance, while the overall favourites will have to be wary of a steep finish in Mende.

In his stage-by-stage guide for BBC Sport, Mark Cavendish said: "This type of stage is normally gruelling. On the profile it doesn't look like too many blips but it really does go up and down.

"There's no let off for the last half of the stage and then a horrible steep climb up to Mende. I think a breakaway will stay to the end." 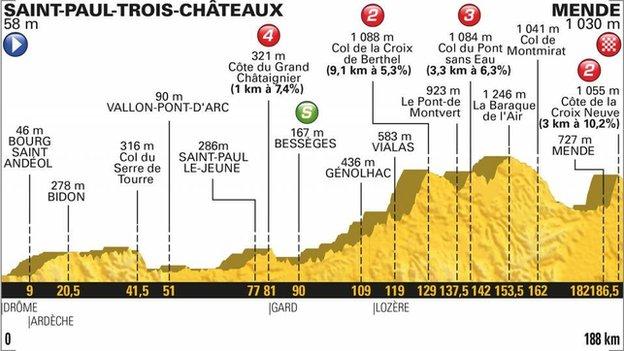