Geraint Thomas has become the third British winner of the Tour de France.

The 32-year-old set out on the three-week, 3,000km race as one of Team Sky's two leaders, alongside four-time Tour champion Chris Froome.

Fellow Briton Froome was clear favourite to win a joint-record fifth Tour, but he ended up reversing roles with Thomas to help his team-mate to victory.

Defending champion Chris Froome crashes late on in a chaotic end to the opening stage. The four-time Tour winner is quickly back on his bike but finishes 51 seconds behind several rivals for the overall victory, but alongside others including fellow Briton Adam Yates and Australia's Richie Porte. Mark Cavendish does not feature in the sprint finish, won by Colombian debutant Fernando Gaviria who takes the yellow jersey.

Peter Sagan avoids a crash inside the final two kilometres, that delays stage one winner Fernando Gaviria, and then surges past Arnaud Demare on the slight incline to the finish to take his ninth Tour de France stage win and the yellow jersey. Defending champion Chris Froome also avoids the crash as he finishes safely inside the peloton, while team-mate and fellow Briton Geraint Thomas climbs to seventh overall.

BMC secure an impressive victory in the team time trial to put Belgium's Greg van Avermaet into the yellow jersey. Team Sky finish second to help Chris Froome climb the standings and restore parity with most of the overall contenders after losing time in a crash on stage one. Peter Sagan is never in contention to defend the race lead as he is dropped by his Bora-Hansgrohe team-mates. 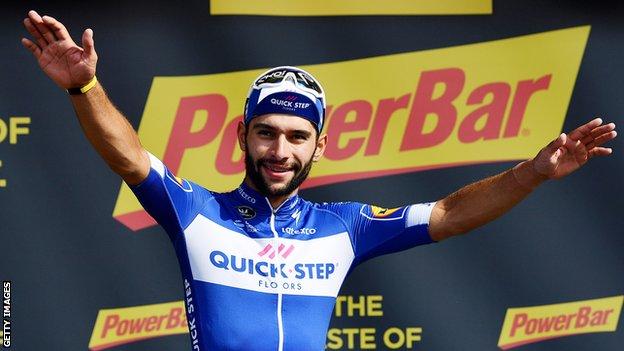 Tour de France debutant Fernando Gaviria wins his second stage, kicking twice to deny Peter Sagan and Andre Greipel in a thrilling finish in Sarzeau, after the peloton finally catch a four-man breakaway just before the final kilometre. Mark Cavendish is boxed in and cannot contest the sprint. Greg van Avermaet retains the leader's yellow jersey, avoiding a crash at 5km to go to finish safely in the bunch alongside the likes of Chris Froome and Adam Yates.

World champion Peter Sagan outstays his rivals to win a dramatic uphill sprint finish in Quimper on stage five of the Tour de France. He makes his move with 200m to go, beating Sonny Colbrelli and Philippe Gilbert for his second stage win. Greg van Avermaet stays in the yellow jersey, extending his overall lead with a two-second bonus during the stage.

Ireland's Dan Martin produces a superb late attack to win stage six, kicking with a kilometre to go on the final climb and holding off the late challenge of Pierre Roger Latour by a second. Team Sky's Geraint Thomas is part of a group three seconds behind but climbs to second overall after securing two bonus seconds during the stage, while Chris Froome finishes a further five seconds behind his team-mate.

Dylan Groenewegen makes it two stage wins in two days, kicking from deep to overhaul Andre Greipel and Fernando Gaviria, who are later relegated for two separate incidents during the finale. That hands Peter Sagan second place and increases his lead in the green jersey points classification, while Mark Cavendish finishes eighth. Team Sky's Geraint Thomas stays in second overall but is now seven seconds off Greg van Avermaet in the leader's yellow jersey after the Belgian grabs a bonus second.

John Degenkolb sprints to his first Tour stage win from a select group at the end of a crash-packed race across many of the cobbles found in the one-day classic Paris-Roubaix. Greg van Avermaet takes second and extends his lead in the yellow jersey to 43 seconds over Geraint Thomas. BMC's Richie Porte abandons the race after crashing just 10km into the stage, while Chris Froome also crashes but is unscathed and finishes safely in the main bunch.

Julian Alaphilippe claims his first Tour stage victory with an impressive attack on the penultimate climb to remain clear to the finish in Le Grand-Bornand. Greg van Avermaet gets in the early breakaway and holds on to finish fourth on the stage, extending his lead in the yellow jersey to two minutes and 22 seconds over Geraint Thomas, though still expects to lose the race lead in the Alps. Chris Froome and Adam Yates finish safely in the bunch to move up to sixth and seventh respectively.

Geraint Thomas becomes the first Briton to win on the fabled Alpe d'Huez, his victory in a five-man sprint finish securing back-to-back stage wins and seeing him extend his lead in the yellow jersey. The quintet, which also included Team Sky team-mate Chris Froome and Sunweb's Tom Dumoulin, attack and counter-attack one another on the way up one of cycling's most famous climbs, but come back together in the final few hundred metres before Thomas accelerates out of the last bend.

Report: Fraile wins from the breakaway as Thomas keeps yellow

Omar Fraile claims his first Tour de France stage win, overtaking Jasper Stuyven inside the last 3km on a brutal final climb after Stuyven had attacked a large breakaway group with 35km to go. The peloton arrives 20 minutes later and Geraint Thomas retains the leader's yellow jersey, closing down attacks by Tom Dumoulin and Chris Froome as those leading three riders on general classification finish alongside each other.

Magnus Cort makes it two stage wins in two days for Astana, easily holding off Ion Izagirre and Bauke Mollema in a three-man sprint. A breakaway of 29 riders finally go up the road and are gradually whittled down, with Cort getting into the key selection to win his first Tour stage. Geraint Thomas enjoys a relatively sedate ride to ensure he retains the yellow jersey into the final week.

An eventful day sees the race stopped for 15 minutes early on after a protest by French farmers, during which police use spray that blows into the peloton and forces riders to pull over and douse their eyes with water. After resuming, a large break goes up the road is whittled down until Adam Yates goes solo over the final climb. But the Briton crashes on the descent with just 7km to go, under pressure from Julian Alaphilippe, who swings past to win his second stage of the race. Geraint Thomas enjoys a relatively easy day to retain the yellow jersey.

Britain's Geraint Thomas retains his overall race lead on a quieter day for those in the hunt for the yellow jersey - although Colombian Nairo Quintana cuts his arm in a crash - as the top of the standings remain unchanged. The expected bunch sprint finish comes to fruition with Arnaud Demare pipping fellow Frenchman Christophe Laporte.

Britain's Geraint Thomas follows all the attacks of his rivals over the final mountains of the Tour before sprinting to finish second on the stage and extend his lead over Tom Dumoulin to two minutes and five seconds heading into the individual time trial on stage 20. Primoz Roglic kicks clear of a group of all the favourites on the final descent to win in Laruns and overtake Chris Froome into third place overall.

Britain's Geraint Thomas finishes third in the individual time trial to ensure he is set to win the 2018 Tour de France, with convention dictating the yellow jersey is not challenged on the final stage in Paris. World time trial champion Tom Dumoulin wins the stage by one second over Team Sky's Chris Froome, after initial confusion over the finishing times. The Dutchman's win sees him secure second overall. Froome's performance is enough to see the four-time Tour winner reclaim third place overall from Primoz Roglic.