Four-time Tour de France winner Chris Froome says his legacy will not be tainted after returning an "adverse" drugs test at the Vuelta a Espana.

The Team Sky rider had double the allowed level of legal asthma drug salbutamol in his urine.

In a BBC interview in Mallorca, the 32-year-old said he "knows the rules" and there was "no wrongdoing".

"I understand this comes as a big shock to people," he said. "I certainly haven't broken any rules here."

The use of salbutamol is permitted, without the need of a therapeutic use exemption (TUE), but only within certain doses.

Froome says he increased his dosage but it was within the legal limits, adding he was "only too happy" to help the UCI "fill in the blanks".

Asked whether he felt his legacy was permanently tainted, Froome said: "No."

He added: "I can understand a lot of people's reactions, especially given the history of the sport. This is not a positive test.

"The sport is coming from a very dark background and I have tried to do everything through my career to show that the sport has turned around."

Froome says he took his team doctor's advice to up his inhaler use after his asthma symptoms got worse during the Vuelta.

He became the first Briton to win the three-week race around Spain, which finished in September - two months after his latest Tour de France victory.

He was notified of the "adverse analytical finding" on 20 September 2017.

The urine test, taken on 7 September, showed levels of salbutamol, which is commonly taken for asthma, were at 2,000 nanograms per millilitre (ng/ml).

That compares to the World Anti-Doping Agency's (Wada) threshold of 1,000 ng/ml.

"I have been a professional cyclist now, treating my symptoms and racing with asthma, for 10 years," said Froome.

"I have got a very clear routine when I use my inhaler and how many times. I have given all that information to the UCI to help get to the bottom of it."

'I need to disguise my weaknesses'

Froome was named in leaked medical records by the Russian hackers Fancy Bears as one of the athletes to use TUEs during competition.

The documents claimed he was given the exemption for the asthma drug prednisolone in May 2013 and April 2014.

Earlier this year, the rider said he rejected a TUE for his asthma during his Tour de France win in 2015.

Froome said journalists could see he was struggling after stages during the Vuelta, but told them he was fine in order to "disguise any kind of weaknesses from his rivals".

"I am racing against guys who are looking for any kind of weakness," he added.

"I am not going to admit through a Grand Tour that 'yes. I am suffering with something', because the next day my rivals will come out absolutely swinging."

An uncertain future for Froome - analysis

Chris Froome's damage-limitation exercise has begun. But the greatest road cyclist in the world still faces a major fight for his reputation.

Froome's recent domination of road cycling has meant he has repeatedly been forced to insist he is clean. He has also been a vocal critic of the abuse of TUEs, something that could now leave him open to suggestions of hypocrisy.

Some will ask why he told reporters he felt "fine" after the 18th stage of the Vuelta, at a time when his team now says his dosage was increased due to "acute asthma symptoms". There will be questions about his announcement two weeks ago that he would ride next summer's Giro d'Italia when he knew this case may prevent it if he was suspended. But others will remain confident he can satisfactorily explain the elevated levels of salbutamol, and continue a career that has earned him a £4m-a-year contract.

Certainly, there will be a huge amount at stake when the UCI rules on this case in several months' time.

This is also another blow to Team Sky after a year of controversies. A UK Anti-Doping investigation into a mystery delivery to former rider Sir Bradley Wiggins and a lack of medical records was damaging enough, but this could be much, much worse.

Like his team, Froome was meant to symbolise a new era for the sport after cycling was brought to its knees by a deeply troubled doping past. But this has left both the rider and his team facing an uncertain future, and ensured the suspicion that lingers around British cycling continues. 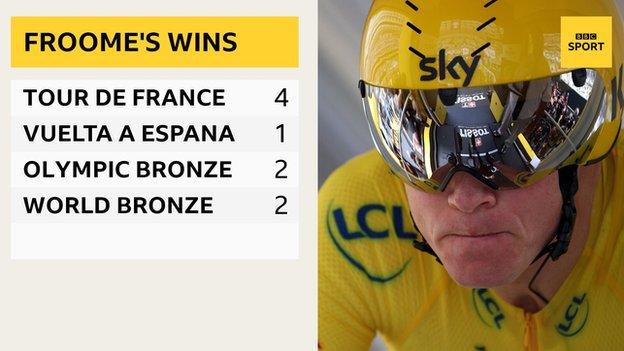 Last week, former UCI chief Brian Cookson said Team Sky should have its reputation "reinstated" following unproven doping allegations and questions over its use of TUEs.

"I don't think anyone should be surprised when a professional sports team pushes the rules right to the very limit," Cookson said.

In November, UK Anti-Doping completed its investigation into allegations of wrongdoing at Team Sky and British Cycling.

The 14-month inquiry was looking into claims a 'mystery' medical package delivered for Wiggins at the Criterium du Dauphine in 2011.

Ukad said it had been "unable" to prove the package contained a banned substance.

Wiggins had sought TUEs to use banned anti-inflammatory drug triamcinoclone for allergies and respiratory issues before the 2011 Tour de France, his 2012 Tour win and the 2013 Giro d'Italia.

Previous salbutamol use in cycling?

The NHS says salbutamol is used to relieve symptoms of asthma such as coughing, wheezing and feeling breathless. It relaxes the muscles of the airways into the lungs which makes it easier to breathe.

It comes in an inhaler, but can also be given as tablets, capsules or syrup and several studies have suggested there is no enhancement in performance for an athlete using it.

However, Wada introduced strict dosage regulations for 2017 for several asthma drugs - including salbutamol - over concerns about the increase in use among athletes.

Italian rider Diego Ulissi got a nine-month ban in 2014 for having 1,920ng/ml in his test results and countryman Alessandro Petacchi was banned for a year for a reading of 1,320ng/ml in 2007.

But riders have also been able to successfully explain adverse analytic findings. Leonardo Piepoli avoided a ban in 2007.

Should Froome not be able to similarly successfully explain the anomaly, he could be stripped of his Vuelta title and may be unable to ride in May's Giro d'Italia - as he seeks to become just the third rider to win three successive Grand Tours - or defend his Tour de France title in July.

Dr Tom Bassindale, an anti-doping scientist at Sheffield Hallam University, expects Froome to have laboratory tests to try to explain the abnormal result.

But he said he was surprised a drug as common as salbutamol had caused this issue.

"The regulations allow the athlete to go through a controlled experiment where he will replicate the dosage taken and try so show why his body might have a different physiological make-up which gave the result," he told BBC Sport.

"I wouldn't anticipate a few extra puffs on an inhaler would have any performance-enhancing effect. It can have similar effects to drinking coffee - your heart beats faster, it can give you a boost like caffeine."

Dr Bassindale said there are a number of reasons why the test result could have been so high - but the main explanation in athletes would be dehydration.

"When the body is dehydrated, it can increase the concentration of the drug in the system," he said.

"Hours out riding a bike through the mountains might have that effect. But, having said that, Froome has been a professional athlete for some time and hasn't had any issue like this before."

Why do so many elite athletes have asthma?

Top athletes are more likely to have asthma than the general population.

This is down to the large volumes of air they breathe in through their mouths when exercising at high intensity over long periods of time.

When the air is cold and dry, this can trigger asthma-related symptoms such as wheezing, shortness of breath and tightness in the chest, also known as exercise-induced asthma. Cyclists are particularly at risk because of the high aerobic element of the sport. Air pollution getting into the airways out on the road can also be a trigger.

Research suggests that about 35-40% of British Olympic cyclists use an inhaler, compared with 21% of the Olympic team as a whole and 9% of the general population.

If asthma is already diagnosed in elite athletes, then intensive exercise can make it worse - but if it is properly treated, the condition should not prove a disadvantage.