Chris Froome has cemented his place among the greats of cycling by becoming the first British winner of the Vuelta a Espana in Madrid on Sunday.

Froome is the third man to complete the Tour de France-Vuelta double in the same year and first in that order.

Italy's Matteo Trentin won the final stage to claim his fourth of the race.

Earlier, Froome was able to sip a celebratory bottle of beer and glass of Cava on his way to the Spanish capital, knowing he had only to cross the finish line to win because tradition dictates the race leader is not challenged on the final stage.

"I've been fighting for this victory for six years. It's amazing to stand on the top step this time," he said, referring to his three second-place finishes in the race in previous years.

"To set off at the start of the year with the goal of winning the Tour of France and back it up at the Vuelta is an incredible feeling.

"But it is nothing I could have achieved on my own. I've got an amazing team behind me.

"To win two Grand Tours like this is an amazing feeling and it's going to be hard to top."

He equals the feat of legendary riders Jacques Anquetil (1963) and Bernard Hinault (1978) in completing the Tour-Vuelta double - the previous doubles were done when the Spanish race was held in the spring with the Tour following in July.

After Saturday's stage, Froome told BBC Sport: "There is a reason that nobody has won the Tour and come on to win the Vuelta. It's a massive challenge. In the cycling world it doesn't get much bigger."

It is a fifth Grand Tour victory for the four-time Tour de France winner, putting him joint seventh on the all-time list, six behind Belgian legend Eddy Merckx, who leads with 11.

As well as winning the red jersey for the overall victory, Froome also claimed the green points jersey and white combined jersey at the 72nd edition of the three-week race.

The green jersey was under threat on the final stage with Trentin needing to win the intermediate sprint and the stage to have a chance of taking it from Froome.

Team Sky pushed Trentin's Quick-Step Floors team hard but he won the intermediate sprint to pick up four points on the third crossing of the finish line and he took 25 more for winning the stage after the riders completed eight laps of a 5.6km circuit around Madrid.

However, Froome kept pace with the sprinters to finish 11th on the stage, enough to win the classification by two points.

Trentin said: "Froome told me he wanted to defend the jersey but four stage wins and not the jersey is a joke. It is a pity but I can survive."

Contador given lap of honour

The retiring Alberto Contador, a three-time winner of the Vuelta, was allowed to break clear of the peloton and ride into Madrid on his own to take the plaudits of the thousands of spectators lining the route.

It was the peloton's way of acknowledging the achievements of the Spaniard, who also won the Tour de France and Giro d'Italia twice each, making him just one of six riders to have won all three Grand Tours.

Saturday's spectacular solo victory on the Angliru in the penultimate stage of this year's race was a final swansong for El Pistolero, who said he "could not have hoped for a better finish and on such a legendary climb".

He lost a few seconds on the final stage to drop from fourth to fifth overall, behind Wilco Kelderman, but his attacking efforts throughout the race were recognised by race officials who awarded him the combativity prize.

"It was great to be left off the front going into Madrid, it was very special," said the 34-year-old.

"My career has been a joy and I'm enjoying this. I just want to say thanks.

"Many riders of my generation are retiring and I won't be in the peloton but I will be helping the young riders to develop and become great."

Contador's career was not without controversy, though. He was banned and had his 2010 Tour and 2011 Giro titles stripped from him after failing a doping test, a result he claimed was down to food contamination. 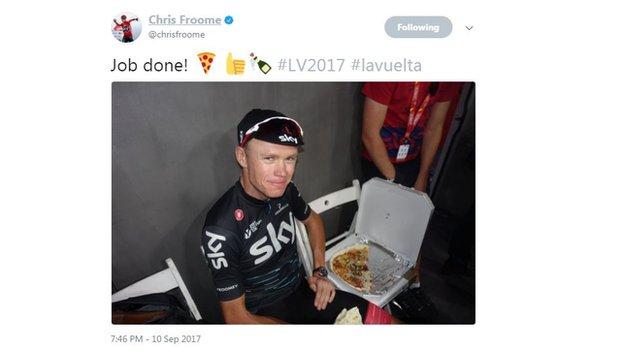 After a solid opening team time trial performance, Froome's victory was built on a steady accumulation of seconds before the decisive blow was delivered on stage 16's individual time trial, when he beat his nearest rival Nibali by almost a minute.

He took the race leader's red jersey after finishing third on the first mountain stage just three days into the race and it was a lead he would not relinquish, winning stage nine to move 36 seconds clear and emphasise his dominance in the opening week.

His lead moved out to more than one minute after stage 11 but two crashes late on stage 12 cost him 20 seconds, leaving him "grateful" not to be injured.

Six more seconds were gained on stage 15 after his Team Sky team-mates helped chase down Nibali on the race to the highest point of this year's Vuelta.

His one off-day came on stage 17, when he struggled on the final ascent, but he responded brilliantly on the next stage to open a 97-second lead that he increased further on the race's brutal final ascent of Angliru.

192 comments
Back to top
unknown