Britain's Chris Froome says winning a fifth Tour de France title will be his "priority and focus" for 2018 and he still has "lots to achieve" in cycling.

Froome, 32, has become the first man to follow a Tour victory by winning the Vuelta a Espana in the same year.

Six riders have won all three Grand Tours during their career, with Froome yet to triumph in the Giro d'Italia.

But, after winning the Vuelta, the Team Sky rider told BBC Sport: "I'm sure the time will come when I will target the Giro.

"It's a big task to try to go for the Giro and it could compromise the Tour but I wouldn't write it off."

Speaking earlier, on BBC Radio 5 live's Sportsweek, he said: "A fifth Tour de France title will take my aim but it's early days and I'll wait to see what the Giro, Tour and Vuelta courses look like next year and sit down with my team to draw up the goals."

He added it would be "hard to not sign up for next year's Vuelta" because it is a race he "genuinely loves".

When asked whether it was possible to win all three Tours in one year, he told BBC Radio 4's Today programme: "I wouldn't say it's impossible, nothing's impossible, but certainly it would take some doing."

Read more: 'A friendly accountant off the bike, a cold-eyed winner on it'

Who has won the Grand Tour treble?

No rider has ever come close to winning all three Grand Tours in the same calendar year, so the prospect of Froome taking on the Giro, which takes place in May, the Tour in July and Vuelta in August, is slim.

Merckx won four consecutive Grand Tours, the Giro and Tour in 1972 and followed that by claiming the Vuelta and Giro titles in 1973. Hinault won three on the trot: the 1982 Giro and Tour and 1983 Vuelta.

Stephen Roche, who won the Tour de France and Giro d'Italia in 1987, said winning all three titles in a season would be "humanly impossible".

One thing is for certain - Froome will fly to Norway this week for the Road World Championships in Bergen, which start next weekend.

"I am definitely doing the world team time trial championships next Sunday but further than that it's probably time for me to put my feet up," he said.

While Froome is the first rider to win the Vuelta after the Tour, two other men have won both races in the same year.

Hinault achieved it in 1978, 15 years after Anquetil. On both occasions, the Vuelta was held in the spring - it was changed to late summer in 1995.

"There is a reason that nobody has won the Tour and come on to win the Vuelta," said Froome. "It's a massive challenge. In the cycling world, it doesn't get much bigger."

Froome's win in Spain lifts him to joint seventh on the list of most Grand Tour winners with five, six behind Merckx of Belgium.

There are two riders ahead of Froome in the rankings who did not win one leg of the Grand Tour trio.

Italian Fausto Coppi, who is generally regarded as one of the greatest riders of all time, won five Giros and two Tours in a career interrupted by World War Two but did not claim the Vuelta crown, while Spaniard Indurain added two Giros to his five Tours but could do no better than second in his home race in 1991.

Italian pair Gino Bartali and Alfredo Binda, who Froome has drawn level with, both failed to win the Vuelta, with Binda also missing out on the Tour title.

Froome may have won the Tour four times but he and his Team Sky team-mates have endured hostility on the road in France, particularly during the 2015 edition of the three-week race.

He had urine thrown at him during a stage, amid accusations that he was doping, while then team-mate Richie Porte said he was punched during the race and Geraint Thomas said they were booed.

In contrast, Froome said it was "an amazing atmosphere" on the roads in Spain and the spectators "really cheer on all the riders".

"It's better in that sense than over in France and that's why it's so special to keep coming back."

He added: "This year's Vuelta was tougher than the Tour. It has been the hardest race I've ever done by a long way.

"In the Tour there are transitional stages but the Vuelta was hardcore every day." 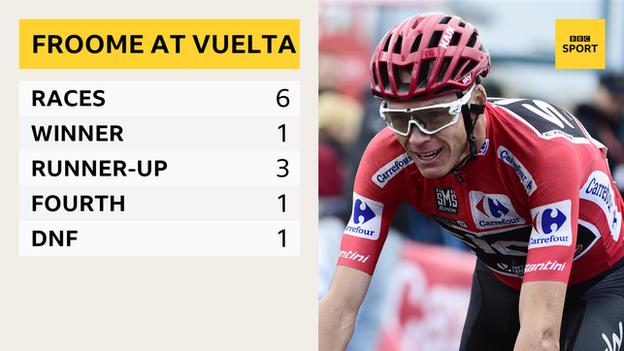 'You have to sit back and admire Froome'

Team Sky general manager Sir Dave Brailsford paid a glowing tribute to his rider, saying for him to win back-to-back Grand Tours was "some achievement".

"It's not just the physical thing, it's the resilience and mental tenacity that is incredible," he said.

"Every now and again you see a world-class athlete right at the top of their game who gets it all right and does all the little things right.

"They've got the right mentality, brilliant leadership skills, they are mature, confident and they know how to win and we've got that in Chris Froome.

"Sometimes you need to step back and really enjoy watching and admire what he is doing because it is remarkable."

Asked if Froome was one of the all-time greats, Brailsford said: "Without a doubt. Not just on the bike but off it as well.

"He's the complete athlete. Boy is he a winner. The way he wins, he ekes it out and he never gives up and wears his competitors out and they don't know how to beat him."