Britain's Chris Froome extended his overall lead at the Vuelta a Espana with victory in stage 16's time trial.

The 32-year-old Team Sky rider was untouchable as he completed the 40.2km course in 47 minutes.

Vincenzo Nibali began the day one minute and one second behind Froome but was 57 seconds slower, despite a strong performance to finish third.

Froome now leads the Italian by one minute and 58 seconds, as Wilco Kelderman moved up to third overall.

Alberto Contador, who is set to retire after the race, rose to the occasion with a combative time of 47 minutes 59 seconds to finish fifth, just behind Ilnur Zakarin.

But nobody could match the remarkable effort produce by Froome, who took his second stage win of this year's race with another comprehensive signal of his superiority over his rivals.

With five stages remaining, he is well placed to become just the third rider to win the Tour de France and Vuelta in the same year, but there are still significant tests ahead, most notably Saturday's summit finish on the Alto de l'Angliru.

Wednesday's stage 17 is a 180.5km ride from Villadiego to Los Machucos.

"The course suited him [Froome] but you still have to time it well and he showed again why he is considered to be one of the world's best time triallists today," Team Sky boss Dave Brailsford told Eurosport.

"But there are still some really hard stages coming up, the climbs are so steep and intense that there is no time to relax. It's a difficult day tomorrow, and for the guys who went full today, we'll see how that impacts on them." 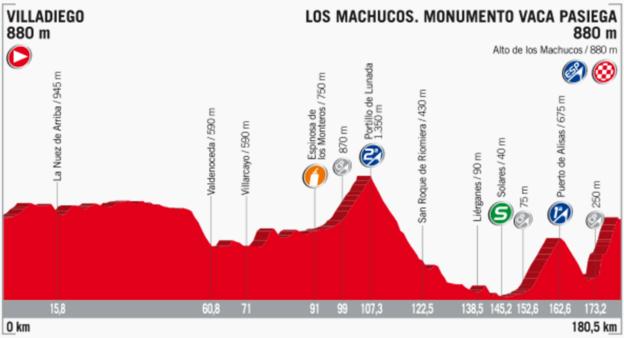