Froome, aiming to become the third man to win a Vuelta crown in the same year as Tour de France success, attacked on the final climb and now has a 10-second advantage over his nearest rival.

Froome was set up by Team Sky's Gianni Moscon, with Alberto Contador one of the few rivals to match his pace.

The race finishes in Madrid on 10 September after another 16 stages.

Vincenzo Nibali and Romain Bardet both lost time to favourite Froome with Spain's David de la Cruz, who had been two seconds behind before the stage start, slipping 23 seconds adrift.

Froome, who finished in a group that also included Cannondale's Michael Woods and Orica's Esteban Chaves, said it was a day to reveal the general classification contenders.

"I learned a lot about my rivals," he said.

"Chaves seems to be one of the strongest climbers. Obviously Contador did a good ride today. Tejay van Garderen is still in the mix. Nicolas Roche is also up there.

"I was surprised to see Vincenzo Nibali and Fabio Aru lose a bit of time, and Romain Bardet. But it's a long race and I imagine it will be a different race once we get in the high mountains."

Lutsenko's biggest victory of his career came as he followed Katusha's Marco Haller off the front of a breakaway group and then powered clear of the Austrian and kept the chasing Merhawi Kudus at bay.

British brothers Adam and Simon Yates both conceded ground to Froome, but Simon moved up a place to ninth in the overall standings. 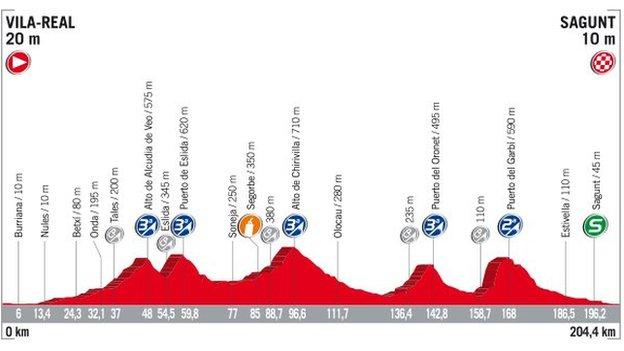