Froome reached the Col d'Izoard summit in fourth, just behind Romain Bardet, who is now 23 seconds adrift of the Team Sky man in second place overall.

Barguil, who will finish the race as King of the Mountains, pulled away from Darwin Atapuma to win his second stage.

There are just three stages remaining - two flat routes and Saturday's time trial in Marseille, where Froome is expected to extend his advantage.

Froome on cusp of fourth title

The final day in the mountains represented the last realistic opportunity for Bardet, who rides for AG2R La Mondiale, and Cannondale-Drapac's Uran to prevent defending champion Froome claiming his fourth title.

The Briton's struggles on the steep finale in Peyragudes on stage 12 may have given them hope they could inflict similar damage on the punishing Izoard, but Froome's impressive form since that wobble held.

AG2R tried to weaken the group of favourites by taking over from Sky at the front of the peloton over the penultimate climb of the day - the category one Col de Vars - but their tactic only resulted in a stalemate.

The French team drove again on the 14.1km-long climb of the Izoard, putting several Sky riders into difficulty, only for the imperious Michal Kwiatkowski to bury himself in support of Froome and set up Mikel Landa to attack.

Froome refused to chase his Spanish team-mate, who overtook a struggling Fabio Aru to go fourth overall, forcing Bardet to respond, before bridging to the Frenchman and launching an attack of his own.

A burst from Uran towed Bardet back up to Froome but by then the contenders had run out of road to take both the yellow jersey and the buffer they needed for Saturday's time trial.

Froome may be wary of Uran - a solid time trialist who looks stronger as the race goes on - and will not be complacent in negotiating the last three stages, but a fourth Tour title beckons.

After becoming the first Frenchman in 12 years to win on Bastille Day with his victory on stage 13, Barguil is now the first rider to win atop the Col d'Izoard - a climb used 34 times previously in the Tour but never before as a summit finish.

The 25-year-old Sunweb rider calmly stayed with the group of favourites before surging away alongside Alberto Contador with about 5km to go.

Barguil quickly left the two-time champion behind, reeling in and surpassing the remnants of a 54-man breakaway that went clear earlier in the stage until he finally reached lone leader Atapuma.

As the pair passed 1km to go, Barguil kicked again and held on to claim Sunweb's fourth stage victory of this year's Tour.

The German team should end the race with two of the four jerseys.

With nearest rivals Primoz Roglic and Thomas de Gendt not able to contest the Col de Vares climb, Barguil secured the polka dot jersey even before winning the stage.

And team-mate Michael Matthews has effectively made certain of victory in the green jersey points classification, still holding a lead of 160 points over Andre Greipel with a maximum of 160 remaining.

In the best young rider classification, Yates' lead over Louis Meintjes is down to two minutes six seconds, but the Orica-Scott rider should hold on to emulate twin brother Adam, who won the white jersey last year.

Any sprinters left to challenge on stage 19?

After two tough days in the Alps, the riders now have to tackle the longest stage of the Tour - Friday's route from Embrun to Salon-de-Provence.

The 222.5km stage features three category three climbs that could favour a breakaway going the distance, not least because several teams have lost their main sprinter and may not want to work with Greipel's Lotto Soudal team.

If it does end in a sprint, Greipel is probably the fastest man in the race. If the breakaway succeeds, look out for Britain's Steve Cummings. 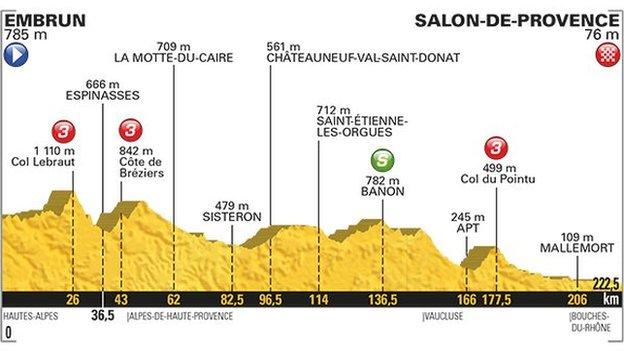