Bardet climbed to victory on the 214.5km stage to move third overall.

"It was a tough day for me in the final metres and my team-mates had done such an amazing job," said Froome.

British champion Steve Cummings made a long solo break on the 50th anniversary of the death of compatriot Tom Simpson but was caught inside the final 10km on the penultimate climb.

Britain's Simon Yates moved up to sixth overall after finishing ninth on the stage and retains the best young rider's white jersey.

For the majority of this first day in the Pyrenees - the second longest stage of this year's Tour - Team Sky successfully employed their familiar tactic of sitting at the front of the peloton, keeping the pace just high enough to neutralise attacks by defending champion Froome's rivals.

All seven of Froome's remaining team-mates were still in place at the foot of the highest climb of the day - the 'hors categorie' Port de Bales - before Landa and fellow Spaniard Mikel Nieve guided their leader into the final few kilometres.

New Zealand's George Bennett attacked in the final kilometre and although Landa reeled him in, Aru then kicked.

He distanced Froome as Uran and Bardet bridged the gap before the Frenchman found enough power to haul himself up a section with a gradient of 16% to win.

Uran and Aru followed two seconds later but Froome was still struggling in visible pain behind, eventually losing 22 seconds to stage-winner Bardet and with it the yellow jersey to Aru.

Whether Froome's style simply did not suit the punchy 2.4km final climb, or whether there are issues with his form this year, remains to be seen.

Having won his first Tour stage at La Planche des Belles Filles on stage five, Aru now has the first yellow jersey of his career.

The Astana rider closely marked Froome throughout the stage - albeit a little too close when he followed the Briton and Nieve off the road as they overshot a corner at the foot of the Peyresourde, only to easily catch back up - and attacked with just enough road left to take the overall lead.

Aru's Astana team have been considerably weakened, however.

Dario Cataldo abandoned after a crash on stage 11 and Jakob Fuglsang could follow, having had to battle to finish stage 12 after suffering two fractures in the same crash that forced his team-mate out of the Tour.

Bardet - bidding to become the first French Tour winner since Bernard Hinault in 1985 - finished a distant second to Froome in last year's Tour but has shown more attacking intent in this edition, epitomised by the words, "Take the risk or lose the chance," printed on the top tube of his bike.

Cannondale-Drapac rider Uran, Bennett and Serge Pauwels of Team Dimension Data were given 20-second time penalties for taking bottles in the final 10km, but the race jury reversed their decision on Friday.

After a frantic scramble for position early on, a group of 12 riders broke clear, including Dimension Data's Cummings - an expert in long, solo victories from breakaways, having won Tour stages in this manner in both 2015 and 2016.

The group gradually thinned until just Cummings and Belgium's Thomas de Gendt remained, before the Briton attacked to pass over the summit of the Port de Bales alone, only to be caught on the Peyresourde.

Cummings may look to get in a breakaway again, with stage 19 in particular a potential target.

Friday's stage 13 is a short but mountainous 101km route from Saint-Giron to Foix, taking place on Bastille Day.

French riders are almost duty bound to attack on their national day and with Bardet's descending skills, could he win the race into Foix and make it back-to-back stage wins? 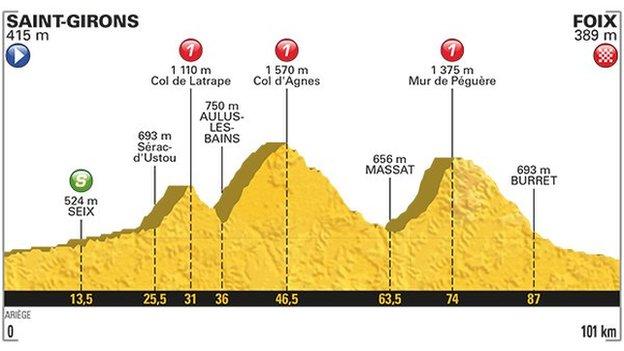