A cycling anti-doping body is investigating claims by British rider Josh Edmondson that Team Sky covered up his use of banned injections.

Edmondson told the BBC he was secretly injecting himself with a cocktail of vitamins when riding for Team Sky.

The 24-year-old said he confessed to Team Sky at the time but there was "a cover-up" by senior management.

Following the report, the UCI said the Cycling Anti-Doping Foundation is in touch with the UK Anti-Doping Agency.

Cycling's governing body said the Anti-Doping Foundation, an independent entity in charge of the sport's anti-doping program, will "assess the matter".

Edmondson, who was on Team Sky's books in 2013 and 2014, also told BBC sports editor Dan Roan he had severe depression after independently using the controversial painkiller Tramadol.

He said the pressure of his selection for a major race in 2014 led to him breaching the UCI's 'no-needle' policy "two or three times a week" for about a month.

Team Sky say legal vitamins and a needle were found in Edmondson's room, but they did not report the incident because he denied using them, and over concerns he "could be pushed over the edge".

Former Team Sky head of medicine Dr Peters confirmed to the BBC that a member of Team Sky who shared a house with Edmondson had found "a needle and some vials", and had taken a photograph of the evidence.

But Team Sky say the incident was not reported, after Edmondson told Dr Peters via Skype that he had not used the equipment.

"He fell apart at the seams quite dramatically. A number of things I asked him during that interview really alarmed me," said Dr Peters.

"I was now in a position where I can say the welfare of the athlete was number one."

Asked whether Team Sky should have handled the case differently, Dr Peters said: "We could have reported it. We could have made a different decision. We'll never know in hindsight.

"I suppose if I'm looking at safety issues I did think there was a really big risk this lad would be pushed over the edge. I stand by my decision." 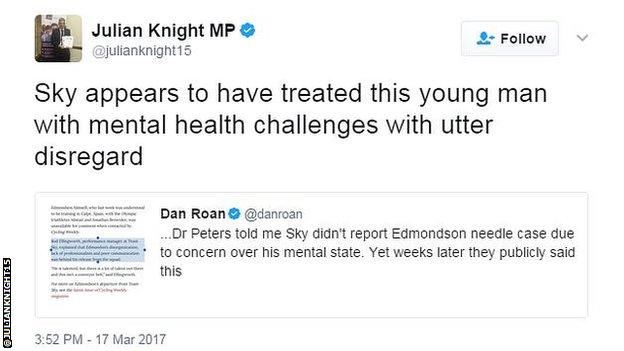