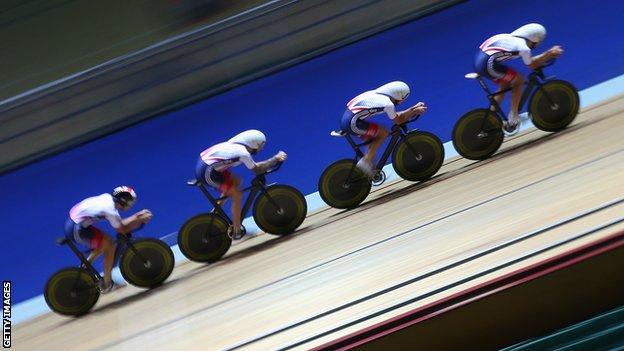 The chief executive of UK Sport says she will apologise to anyone who believes the agency is partly to blame for failings at British Cycling.

Liz Nicholl told BBC Sport her organisation was not responsible for standards at the governing body because "we don't live in the velodrome".

But she did admit UK Sport could have been "more inquisitive".

Nicholl also said British Cycling had been "courageous" to apologise after bullying and sexism allegations.

An independent investigation into the culture at British Cycling began last year after former riders complained about their treatment.

A report on the findings has been delayed for legal reasons, but publication is imminent.

And a 39-point 'action plan' of reforms overhauling governance and welfare policies has now been introduced.

The credibility of British Cycling was left "in tatters" according to one MP this week, after revelations that no records were kept of medical treatments for riders.

Nicholl said she was "shocked and disturbed" by the failure, and that there were various "fires" at the governing body.

"This is a governing body that has not had its eye on culture and behaviours," she said.

"But it is listening, and has committed to actions that should address that, so I'm optimistic for the future."

'We're only as good as the information shared with us'

The controversy comes with UK Sport facing scrutiny over its removal of funding for various sports, including badminton and wheelchair rugby.

The latter has started a crowd-funding campaign to replace the £3m it lost.

UK Sport has warned British Cycling the £26m it is due to receive for elite performance leading up to the Tokyo 2020 Games is now in jeopardy, although it has previously held the organisation up as a flagship for other sports.

However, Nicholl denied her organisation's 'no-compromise' strategy may be partly responsible for a 'win-at-all-costs' culture at the troubled governing body, and that there should have been more oversight.

"We fund 36 other sports... we provide support and guidance, we check, we challenge, but we don't live in the velodrome," said Nicholl, who last week accused British Cycling of feeding UK Sport "a very light-touch version" of a 2012 internal review.

"If there's a perception, then I will apologise to anybody who thinks we may have had a part to play in that.

"Could we have been more inquisitive? Yes. But we're an investor, and not embedded in any sport. We're only as good as the information that is shared with us."

'There won't be less success'

With other sports now being asked to improve their governance and duty of care towards athletes and staff, Nicholl was asked if she would be prepared for Britain to win fewer medals if the focus shifted from winning to welfare.

"There won't be less success," she said. "If you address duty of care there will be more success because you create an environment which is very positive, so I think we'll see the results getting better."

The review into British Cycling's culture began last year after former technical director Shane Sutton, who was later cleared of eight of nine allegations, was found to have used sexist language towards cyclist Jess Varnish.

Varnish, 26, was dropped from British Cycling's elite programme in April, and says she has been frustrated in her attempts to find out why.

She has not yet given up hope of resuming her career.