A doctor who received a 'mystery package' for Sir Bradley Wiggins in 2011 has no record of his medical treatment at the time, MPs have heard.

Team Sky and British Cycling's record-keeping was questioned in the hearing.

"No one has any recognition of what was in the package," UK Anti-Doping chief Nicole Sapstead said on Wednesday.

The select committee is conducting an inquiry entitled 'Combatting doping in sport', while Ukad has been carrying out its own investigation into the contents of the jiffy bag package.

Referring to Team Sky's incomplete records, Sapstead described it as "odd", adding that she thought a team founded on the premise of racing cleanly would have evidence "to demonstrate any inferences to the contrary".

Committee chairman Damian Collins MP said after the hearing that the "credibility of Team Sky and British Cycling is in tatters".

He added: "How can you say British Cycling is the cleanest and most ethical in the world when there are no records to substantiate what the doctors are giving the cyclists?"

Collins told BBC Sport the hearing had been "a damning indictment of the way things have been run" at both organisations.

Dr Freeman, who received the package from then-British Cycling coach Simon Cope on the final day of the Criterium du Dauphine in France in 2011, missed the hearing because of ill health.

Cope described himself as a "gap filler" for British Cycling and Team Sky and told MPs he did not ask what was in the package.

But Sapstead said Ukad still does not know for sure if Fluimucil was in the package because there is no paperwork.

"We have asked for inventories and medical records and we have not been able to ascertain that because there are no records," she said.

What do Team Sky and British Cycling say?

Team Sky said they had "co-operated fully" with Ukad's investigation and denied any wrongdoing.

"Team Sky is a clean team," the statement said. "We abide by the rules and we are proud of our stance against doping.

"We believe our approach to anti-doping is rigorous and comprehensive."

British Cycling, meanwhile, acknowledged "serious failings in our record-keeping at the time" but said they would review and make changes to their processes.

"We are wholly committed to clean sport and I want to assure athletes, fans and all other stakeholders that this commitment is unwavering," said British Cycling chair Jonathan Browning.

"It is not enough to just be clean, we must also be able to demonstrate that we are clean."

It is the team which championed its use of marginal gains. But Team Sky, together with British Cycling, are now embroiled in a monumental mess.

The evidence provided by Nicole Sapstead, and in a different way by Simon Cope, has damaged the reputations of both organisations which have preached a commitment to keeping cycling drug-free in recent years.

The lack of effective auditing and the claimed "resistance" to investigators are problematic enough.

What will require a more rapid response is the assertion by Sapstead that records show British Cycling's medical store held a significant amount of triamcinolone, with suggestions it was being used by more than one rider.

Finding answers to that however would require access to every rider's medical files - a problem given the overriding requirements for doctor/patient confidentiality.

The implications of this long-running and ongoing affair could therefore be wide ranging.

What did anti-doping chief tell committee?

Sapstead said Ukad has interviewed 34 current and former riders and staff members at British Cycling and Team Sky in an investigation that has taken up more than 1,000 man hours.

She described the confusion of how Freeman, who was effectively working for both British Cycling and its road racing off-shoot Team Sky, ordered and stored medicine for riders at the governing body's Manchester headquarters, with no clear separation between which drug was for which outfit.

"It's very clear from our investigation that there is no audit trail of what is going in and out of a comprehensive supply of medical products," she said.

Sapstead was asked why Dr Freeman could not produce any evidence.

"He kept medical records on a laptop and, according to Team Sky policy, was meant to upload those records to a dropbox that the other team doctors had access to," she said.

"But he didn't do that, for whatever reason, and in 2014 his laptop was stolen while he was on holiday in Greece."

Sapstead said Ukad contacted Interpol to check if this theft was reported at the time but has not received any confirmation it was, although Freeman did report it to British Cycling.

What did courier tell committee?

Cope said he was asked by his then-boss Shane Sutton to pick up a package from the National Cycling Centre in Manchester on 8 June, 2011 and take it out to French ski resort La Toussuire, where the Dauphine [won by Wiggins] finished on 12 June.

He told MPs he considered this to be a routine request and common in cycling.

"It must have been something medical, because it was for Dr Freeman, but I had no reason to doubt it. Throughout my career, I've looked up to our governing body. We've done so well and with a zero-tolerance stance [on doping]."

When pointed to the fact he was taking medical products overseas, Cope - who now manages Wiggins' professional road-racing team - said: "I probably should have asked what was in the package but the other day I travelled down to Spain with 40 boxes in the car. I didn't check every box, but I presume they were helmets."

Cope was asked to explain a discrepancy between his recollection of his movements that week and the expense claim he submitted to British Cycling.

"I might have been trying to fiddle them. We all do that, don't we?" he said.

Wiggins is a five-time Olympic gold medallist and in 2012 became the first Briton to win the Tour de France.

He and Team Sky boss Brailsford have come under scrutiny since information on the rider's authorised use of banned drugs to treat a medical condition was released by hackers.

Wiggins, an asthma and allergy sufferer, received special permission to use triamcinolone shortly before the 2012 Tour as well as the previous year's event and the 2013 Giro d'Italia.

His TUEs were approved by British authorities, and cycling's world governing body the UCI. There is no suggestion either the 36-year-old or Team Sky broke any rules.

What the papers said 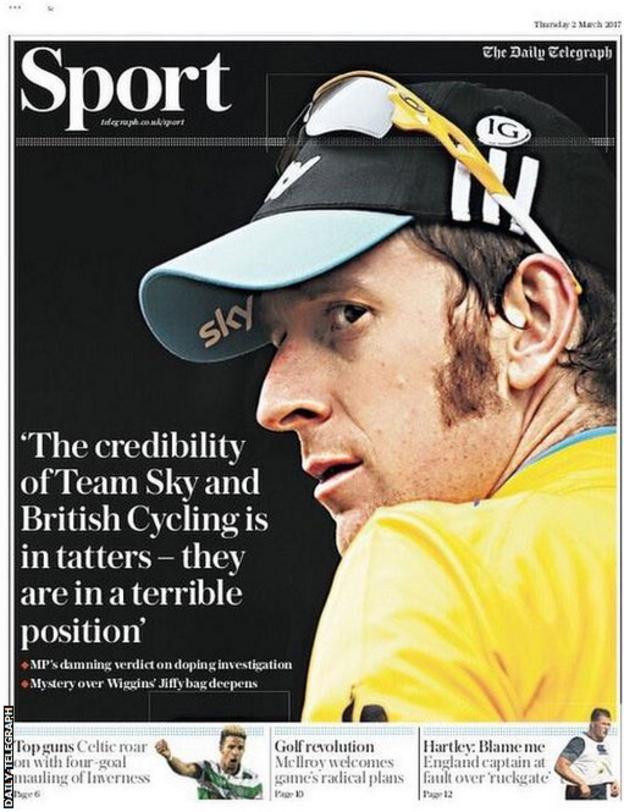 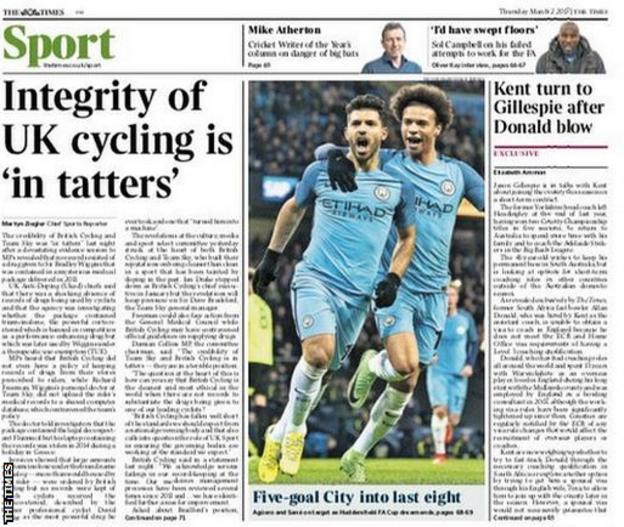 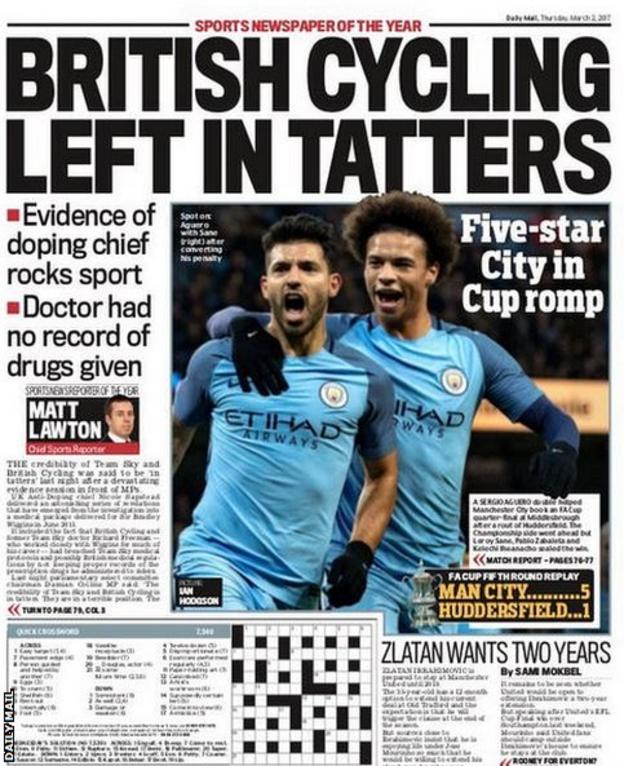 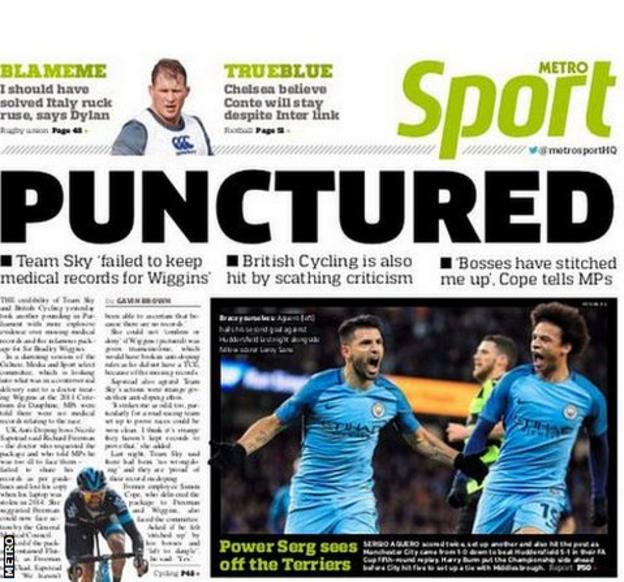 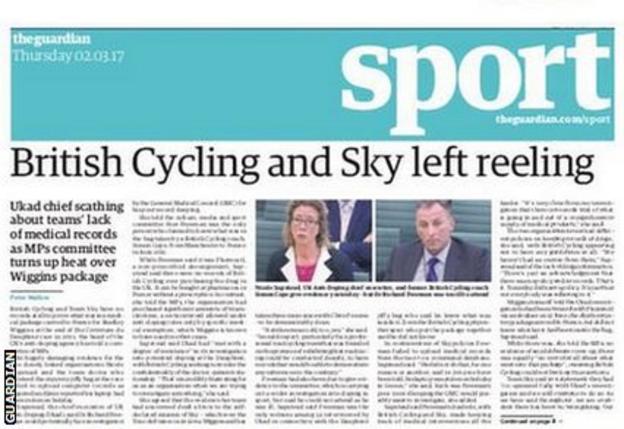