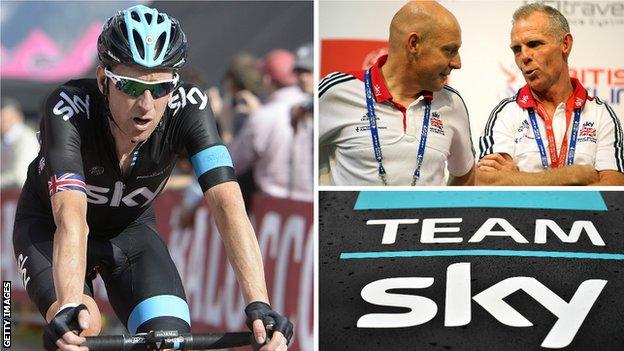 A 'mystery' medical package, a courier, a doctor, a world-famous rider and a ground-breaking cycling team. It's a story of many parts.

As MPs again look at the circumstances surrounding a jiffy bag delivered to Sir Bradley Wiggins in 2011, we look at the background to the inquiry.

How did this issue arise?

Team Sky came under pressure to reveal the contents of the 'mystery' package following a Daily Mail allegation in October 2016.

The newspaper claimed a jiffy bag was delivered to Team Sky on the final day of the 2011 Criterium du Dauphine - which Wiggins won - by Simon Cope, a former professional rider then working as a coach for British Cycling's women's teams.

Cope reportedly made the trip at the request of the team and Dr Richard Freeman, then a medic at Team Sky who now works with British Cycling.

He was said to have flown into Geneva Airport, driven for two hours to France to deliver the package before driving back to Geneva, where he was accompanied by the team's former head coach Shane Sutton, and flew back to the UK.

UK Anti-Doping (Ukad) then began an investigation into the contents of the package.

Team boss Sir Dave Brailsford was already facing questions after Wiggins' use of a banned steroid before races was leaked by hackers Fancy Bears.

Wiggins had sought therapeutic use exemptions (TUEs) for the anti-inflammatory drug triamcinoclone, for allergies and respiratory issues before the 2011 Tour de France, his 2012 Tour win and the 2013 Giro d'Italia.

Brailsford defended the five-time Olympic champion and insisted the team "do not cross the line" on performance-enhancing drugs.

What was in the package?

In an interview with Cycling News, Cope said he did not know what was contained in the package he was asked to carry.

"It was just an envelope, a jiffy bag, a small jiffy bag," he said. "As far as I know it could have been pedals in there."

When Brailsford faced the Department for Culture, Media and Sport Committee (DCMS) hearing into doping in sport in December, he said he had been told by Freeman that "it was Fluimucil for a nebuliser".

Sutton confirmed the package was for Wiggins, who won the event.

Fluimucil is a decongestant which is used to clear mucus.

It is legal in sport and Brailsford said it was "administered on a regular basis".

Former Olympic champion Nicole Cooke, who has been critical of Cope's role in the matter, was unhappy with Brailsford's testimony, pointing out Fluimucil is available freely over the counter in France, costing 10 euros (£8).

She also said there were eight pharmacies located within 5km of where the team bus was parked in France going into the final day of the Dauphine.

Who else was unhappy at Brailsford's testimony?

David Kenworthy, the outgoing chairman of Ukad, told the BBC the answers given by figures within British Cycling and Team Sky to the DCMS committee were "very disappointing".

"So everybody can remember this from five years ago, but no-one can remember what was in the package. That strikes me as being extraordinary. It is very disappointing."

Committee chairman Damian Collins MP said: "There is a considerable public interest in Ukad's investigation and it is also important to our inquiry into doping in sport to understand what they have been able to determine from their investigation.

"The committee has been told by both British Cycling and Team Sky that they have supplied all the information they have relating to this investigation to Ukad.

"However, we need to know if they have received documentary evidence which confirms what was in the package that was delivered by Simon Cope to Team Sky.

"Without this evidence, I am concerned about how it is possible for the anti-doping rules to be policed in an appropriate manner, if it is not possible to review the records of medicines prescribed to riders by the team doctors."

What was Brailsford's reaction to the criticism?

Brailsford has admitted to handling the crisis "badly", after providing initial explanations for the delivery to the Daily Mail that later turned out to be wrong.

In an interview with the BBC in January, Brailsford insisted Team Sky can be trusted "100%".

When Kenworthy's quotes were put to him, he answered: "The only extraordinary thing I could see was that he actually commented on the whole process himself.

"There is an open investigation that is still ongoing."

Brailsford refused to confirm or deny whether he or anyone else at Team Sky had been able to provide paperwork to prove the package contained Fluimucil.

"I can't talk on behalf of British Cycling."

British Cycling says it cannot comment while a Ukad investigation is ongoing.

Team Sky have said they are "confident" no wrongdoing will be found when the inquiry is concluded.

Track cyclist Jess Varnish, 26, was dropped from British Cycling's elite programme last April, after which former technical director Sutton was found to have used sexist language towards her.

Sutton was later cleared of eight of nine allegations.

British Cycling found he had used the word "bitches" to Varnish, but the rest of her allegations - including a claim he told her to "go and have a baby" - were not upheld.

Sutton resigned after being suspended pending the investigation, but has always denied wrongdoing.

British Cycling is preparing to brief riders and staff about an 'action plan' of reforms following concerns over the culture at its performance programme.

After Varnish's claims of a 'culture of fear' were supported by other former riders, British Rowing chair Annamarie Phelps was asked to lead an independent investigation into claims of bullying, favouritism and sexism.

Her report - described by one senior source as "explosive" - is due to be published in the next month.