Britain's Katie Archibald fractured her wrist as she and Manon Lloyd won the inaugural women's madison at the Track Cycling World Cup in Glasgow.

The duo collided with Russian and Belgian riders on lap 18 of the 80-lap race, which sees the riders hand-sling each other into the action.

A visit to hospital then revealed damage to her distal radius scaphoid.

"I was very aware of the crowd - it's a good recovery method," Archibald told BBC Scotland after her victory.

Archibald, who got "a bit of an adrenaline kick" from the fall, will miss next weekend's Scottish Nationals but it is not yet known how long she will be sidelined for.

Following their crash, Archibald and Lloyd rode the perfect race, timing their hand-slings to perfection to win three intermediate sprints in succession and keep pace with the French pair, who led by two points heading into the final sprint.

But Olympic team pursuit champion Archibald powered round the final lap to win the sprint as Britain won on 25 points, two clear of France.

"It was a pretty exciting race," the Scot said. "Somebody closed down when we came into a change coming into a sprint. There was nowhere to go.

"We all came down in a domino, which is a hazard of the trade. Something about dangers in the work place. You can say that light-heartedly when we both got back up."

However, after learning of her injury, Archibald said: "Going down I've put my hand out. I've seen a photograph and I was sort of like kicking myself. Never put your hand out. You're always going to break your wrist and I've gone and done it.

"With crashing it's all about natural instinct about what you going to do, tuck and roll is the normal plan of action!" 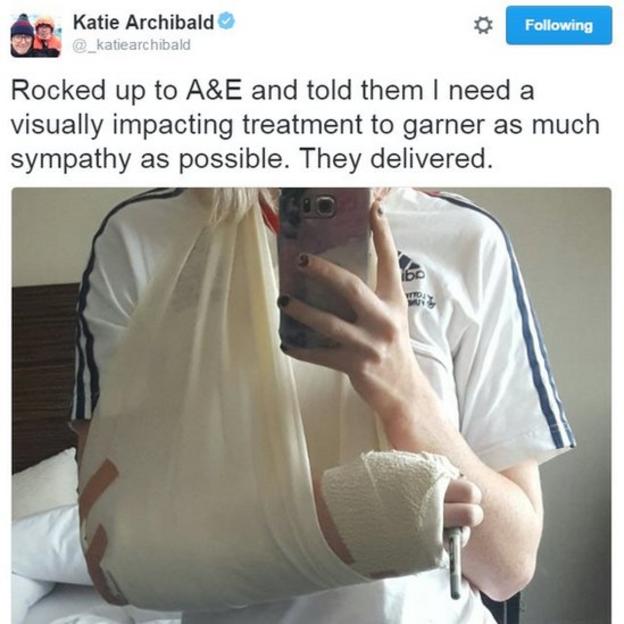 Archibald's preparations for the Rio Olympics were disrupted by injury when she was involved in a motorbike crash in which she ruptured a posterior cruciate ligament and fractured her elbow.

However, she recovered to claim gold and followed that success with three medals at last month's European Championships.

It was a second gold medal of the weekend for Lloyd, who was celebrating her 20th birthday on Saturday.

The women's madison was taking place at an elite world level for the first time - British riders Sir Bradley Wiggins and Mark Cavendish are world champions in the men's equivalent.

Sam Harrison, riding for Wales, won bronze in the points race, while compatriot Lewis Oliva was third in the keirin.

Harrison came through in the final sprint to collect third as Scotland's Mark Stewart, who was riding for Britain, faded in the closing stages to slip from second to fourth.