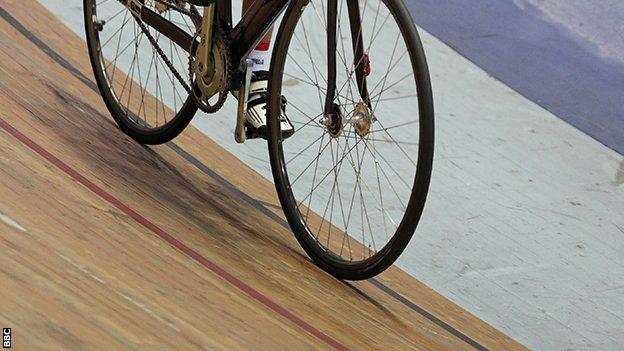 UK Anti-Doping officials have visited British Cycling headquarters as part of an investigation into allegations of wrongdoing in the sport.

Two members of staff went to the National Cycling Centre in Manchester on Friday, with reports saying investigators "targeted" the velodrome.

British Cycling, the national governing body, has put the allegation to the medic in question, doctor Richard Freeman, on the BBC's behalf. He has denied it.

Separately, it is understood Ukad is also looking into an allegation in the Daily Mail that a medical package was delivered to Team Sky by a British Cycling coach in France in 2011.

It is claimed the alleged delivery was made on 12 June, 2011, the day Briton Sir Bradley Wiggins won the Criterium du Dauphine in La Toussuire.

Team Sky said it has been "a challenging few weeks" but they had conducted an internal review, informed British Cycling of the allegation and asked the organisation to contact Ukad.

"We welcome this investigation as we are confident there has been no wrongdoing," Team Sky said in a statement on Saturday.

"We take these issues seriously and we will co-operate fully with Ukad. We hope it can be completed as quickly and thoroughly as possible."

British Cycling, which shares its headquarters at the velodrome with Team Sky, said it has not identified the substance in the package.

It also released a statement which read: "British Cycling can confirm there is an ongoing Ukad investigation with which we are co-operating fully."

A spokeswoman for Ukad said: "UK Anti-Doping is investigating allegations of wrongdoing within cycling. In order to protect the integrity of the investigation, we will not comment further."

Wiggins, Britain's most decorated Olympian, said: "I welcome this investigation."

He was granted a therapeutic use exemption (TUE) to take anti-inflammatory drug triamcinolone before the 2011 Tour de France, his 2012 Tour win and the 2013 Giro d'Italia. He has denied any wrongdoing.

Tiernan-Locke, who rode for Team Sky until he was sacked for a doping violation in 2014, said the timing of Wiggins' TUEs "definitely looks odd".

Wiggins' use of TUEs has come under scrutiny after computer hackers known as the Fancy Bears - thought to be from Russia - published athletes' private medical records stolen from the World Anti-Doping Agency (Wada).

Wiggins' TUEs were approved by British authorities and cycling's world governing body, the UCI. There is no suggestion the 36-year-old or Team Sky, his team at the time, broke any rules.

Questions have been raised over why Wiggins apparently did not need the drug before 2011, or after 2013.

But Team Sky team principal Sir Dave Brailsford has defended his former rider, saying the medication was recommended by a specialist and that Team Sky "do not cross the line" over performance-enhancing drugs.

Already under fierce scrutiny over the TUEs leaked by Russian hackers last month, the sense of crisis swirling around Team Sky has now extended to British Cycling, Ukad's visit to Manchester's velodrome highlighting the intertwined relationship of the two organisations.

2016 has seen a third Tour de France win for Chris Froome and another bumper medal haul in Rio. Next week, Britain is favourite to win the right to host the 2019 Road World Championships.

But there has also been unprecedented controversy for the country's most successful Olympic sport, with a sexism storm seeing former head coach Shane Sutton resign, a positive drugs test for Simon Yates, and Lizzie Armitstead's missed drugs tests.

The fear now will be that this latest turbulence makes Sky reconsider its £35m-a-year team sponsorship, and disrupts British Cycling's preparation for Tokyo 2020.