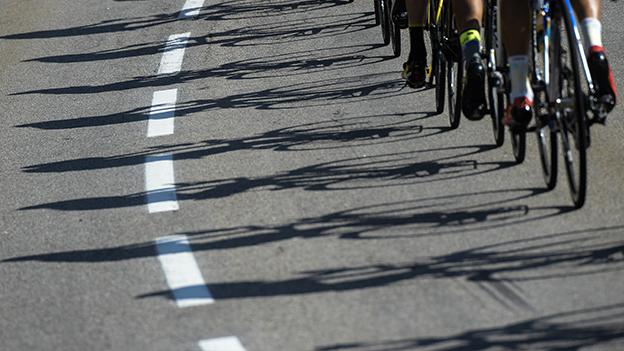 UK Anti-Doping says it is investigating allegations of wrongdoing in cycling.

Ukad is looking into claims by former Team Sky rider Jonathan Tiernan-Locke to BBC Sport that controversial painkiller Tramadol was "freely offered" at the road world championships in 2012.

British Cycling, the national governing body, has put the allegation to the medic in question, doctor Richard Freeman, on the BBC's behalf, who has denied it.

Separately, it is understood Ukad is also looking into an allegation in the Daily Mail that a medical package was delivered to Team Sky by a British Cycling coach in France on 12 June, 2011.

It is claimed the alleged delivery was said to have been made on the day Sir Bradley Wiggins won the Criterium du Dauphine in La Toussuire.

Team Sky said they had conducted an internal review and were "confident there has been no wrongdoing".

Wiggins has previously denied any wrongdoing before a major race.

"We informed British Cycling of the allegation and asked them to contact Ukad, who we will continue to liaise with," they said.

British Cycling says it has not identified the substance in the package.

It also released a statement which said: "British Cycling can confirm there is an ongoing Ukad investigation with which we are cooperating fully. We are unable to comment further at this stage."

A spokeswoman for Ukad said: "UK Anti-Doping is investigating allegations of wrongdoing within cycling. In order to protect the integrity of the investigation, we will not comment further."

In an interview with BBC Sport, Tiernan-Locke also says Team Sky's stance in allowing Wiggins to take a banned drug to treat his asthma has tainted the outfit's image.

Wiggins was granted a therapeutic use exemption (TUE) to take anti-inflammatory drug triamcinolone before the 2011 Tour de France, his 2012 Tour win and the 2013 Giro d'Italia.

Tiernan-Locke, who rode for Team Sky until he was sacked for a doping violation in 2014, said the matter of Wiggins' TUEs "definitely looks odd".

Wiggins' use of the substance has come under scrutiny following revelations made by computer hackers known as the Fancy Bears, who are thought to be from Russia.

The cyber-espionage group accessed the private medical data of some of the world's leading athletes from the World Anti-Doping Agency (Wada).

Wiggins' TUEs were approved by British authorities, and cycling's world governing body the UCI. There is no suggestion either the 36-year-old or Team Sky, his former team, have broken any rules.

Questions have been raised over why Wiggins apparently did not need the drug before 2011, or after 2013.

But Team Sky boss Sir Dave Brailsford has defended his former rider, saying the medication was recommended by a specialist and that Team Sky "do not cross the line" over performance-enhancing drugs.