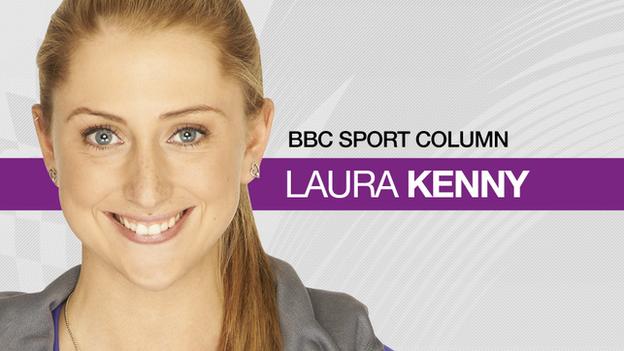 During Women's Sport Week 2016, BBC Sport will have a special column each day by a notable woman in sport. Four-time Olympic cycling champion Laura Kenny (nee Trott) explains how women's road racing lags behind in the equality stakes and how changing her diet helped her win gold at Rio 2016.

During my career, men's and women's track cycling has always been equal.

We get equal prize money and there are equal events. At the London Olympics in 2012, it was the first time both the men's and the women's track schedules were exactly the same and we had the same television air time.

But on the road the situation is a lot different, and it's here progress still needs to be made.

My older sister Emma was a pro cyclist but it was difficult for her to make money as a road rider, especially as she was a domestique (a support rider) and not a lead rider.

The sport's world governing body, the UCI, has rules for minimum wages for men - a Pro Tour rider, for example, is guaranteed at least £30,000 a year.

In women's cycling there is no minimum wage and Emma didn't get paid thousands like her male counterparts did. She did it because she loved it.

It wasn't about the money for her. She loved the lifestyle, she loved living in Belgium and travelling around with the girls.

But there came a point where she wasn't actually enjoying it anymore so she moved on and away from it and is now a personal trainer and cycling coach in New Zealand.

Women's road cycling needs more television exposure and it is starting to go in the right direction.

It is great you can watch the road races at the Olympics and World Championships on television. The Grand Tours are also helping to grow women's cycling too with the Tour de France, for example, showcasing a one-day women's stage. But there is still lots to do.

I often get asked how I got into my sport. It was because my mum Glenda chose cycling as a way of losing weight. She lost eight stone in a year and a half, by cycling and doing spin classes.

I was eight years old when I had my first taste of a velodrome. It was an outdoor one at Welwyn Garden City and my sister and I just loved it from the beginning.

Having Emma in the cycling world was great. She's two and a half years older but I always wanted to beat her. That's siblings for you. It didn't matter if we were on scooters going up and down my nan's street, or whether we were out on our bikes, we were always competitive.

With her being that little bit older, it really did help. In terms of the cycling world, it meant I always competed at levels higher than my age category. I felt that really pushed me on.

I love my long hair. My mum always used to make me have a bob growing up so the minute I was old enough to decide, I grew my hair and I'm never going to cut it off again!

The plaits started when we got fancy new helmets in 2012. The only problem was I couldn't fit all my hair in. So I French-plaited it and pinned it to my head and I've been doing it ever since.

Now it's my little routine before racing. It makes me feel relaxed.

I'm really superstitious in that I have to wear a lucky bracelet - in fact I have to wear lucky everything. So doing my - and also the team's - hair is part of that pre-race routine.

Being a role model is 'insane'

I still feel like the Laura who woke up and rode her bike when she was eight years old because she loved it.

It's weird when people see me as this huge idol as it almost doesn't feel like anything I could have possibly ever done.

After winning again in Rio, [husband and six-time Olympic champion cyclist] Jason and I were saying: "We can't believe we've done this." It just didn't seem like something we could achieve. It was insane.

But I know the importance of girls having role models and finding the sport or exercise that makes you happy.

I used to hate football and basketball at school. Nobody wanted me on their team unless it was my best friend who picked me out of kindness. I would just stand at the side, thinking "don't even pass me the ball".

But I loved cycling. It gave me confidence and created who I am today.

I can never give up chocolate but diet is important

I never really thought about what I ate and diet wasn't a huge part of my life when I became an Olympic champion in 2012.

I would do a gym session and not realise I wasn't having the right amount of protein afterwards or I'd go on a road ride and I wouldn't have had any carbohydrates before it, I'd just have some chocolate.

But at the World Championships in 2013, I won a silver medal in the omnium and it happened three years in a row and I didn't want another silver medal with Rio on the horizon.

We decided it was my diet and I enlisted a nutritionist's help and I started to eat a lot more healthily.

I like to keep it as natural as possible, and I'm allergic to most things anyway. Milk is key for me and was important throughout the Olympic process. I have a pint after training and another before bed. I've performed better on my bike as a result and I feel better in myself as well and I honestly never thought I would.

But I still eat chocolate - I can't give that up.

Hanging out with Elton

Since Rio, Jason and I have been invited to a number of events. We've been on the Jonathan Ross Show - oh, and we got married!

But one of the most interesting invites has to be going to Elton John's for lunch.

It was unbelievable. We walked into his dining room and it was incredible. It was a surreal moment because he's a legend. I couldn't believe it.

He was lovely. He introduced himself and, honestly, he was so normal. I felt like his accent was quite similar to mine, but a way posher version of me!