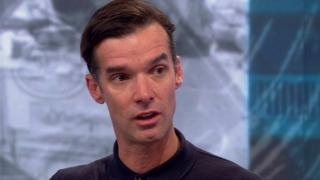 Millar: Cycling 'ahead' on doping

Many of the world's biggest sports are failing to take cycling's lead and "stand up" to doping, the former cyclist David Millar has said.

He told the Victoria Derbyshire programme that tennis, football and athletics all have problems with doping that they are yet to confront.

Millar, 38, was suspended for two years in 2004 for taking a banned substance but has since become an anti-drugs campaigner.

He said the way sport treats those who have doped is "draconian" compared with the justice system present in the rest of society, where people are given a second chance more easily.

He added that the World Anti-Doping Agency faces a major funding problem, with its 30 million euro annual budget too small to tackle the "fundamental problem" of doping worldwide.

On Team Sky, he said Britain had become "the most powerful [cycling] nation in the world" and praised the ability of Chris Froome and Sir Bradley Wiggins to win the Tour de France free from performance-enhancing drugs.

Millar retired from the sport at the end of 2014.

The Victoria Derbyshire programme is broadcast on weekdays from 09:15-11:00 BST on BBC Two and BBC News Channel.