Richie Porte trails leader Alberto Contador by over three minutes in the Giro d'Italia after being penalised for receiving a wheel from an other rider.

Team Sky's Porte, 30, punctured 5km from the finish of stage 10, and Orica's Simon Clarke gave his front wheel to his fellow Australian.

But race rules forbid riders from rival teams assisting each other, so both were given a two-minute penalty.

"It is disappointing that a sporting gesture made in the heat of the moment has resulted in such a strong penalty," said Team Sky boss Dave Brailsford.

"No-one was trying to gain an unfair advantage. This has strengthened our resolve and determination to fight for this race. Richie and the whole team are ready to take it on and there is a lot of this Giro left." 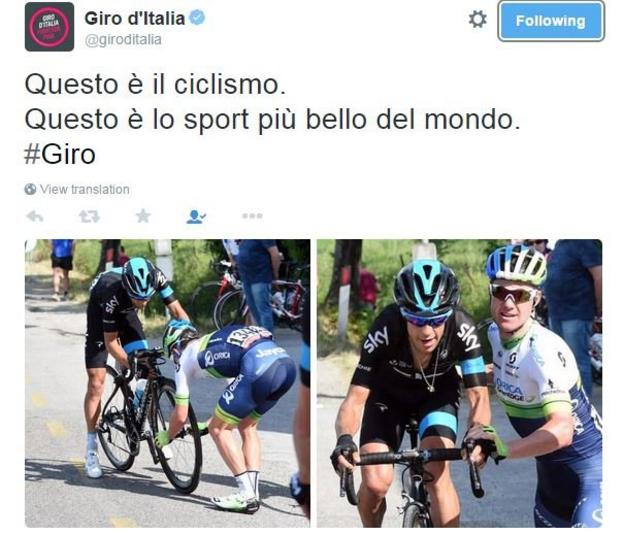 At the time of the incident, the official Giro d'Italia Twitter feed appeared to commend Clarke's actions, accompanying a photo of the wheel change with the message: "This is cycling. This is the best sport in the world."

Clarke later apologised, tweeting: "Feeling sad for Richie Porte. Tried to help a friend as most would. I'm sorry about the outcome of all this!"

The 28-year-old's Orica GreenEdge team-mate and fellow Australian Michael Matthews said he was "devastated" for Porte, but added: "Watch out Giro d'Italia, this man will be on a mission now."

Commonwealth gold medallist David Millar said International Cycling Union (UCI) head Brian Cookson should "show some leadership that the fans of cycling want and need from him". The Briton added it was a shame the UCI "continues to show how incredibly out of touch it is with the modern peloton".

Chris Horner, the 2013 Vuelta a Espana champion, tweeted: "Flat tyre alone in critical moment is penalty enough. If this rule is always enforced, a lot of guys will be in trouble for getting help from a friend."

Porte was third going into Tuesday's stage, 22 seconds behind Tinkoff-Saxo's Contador, but has now slipped to 12th in the 21-stage race, which concludes in Milan on 31 May.