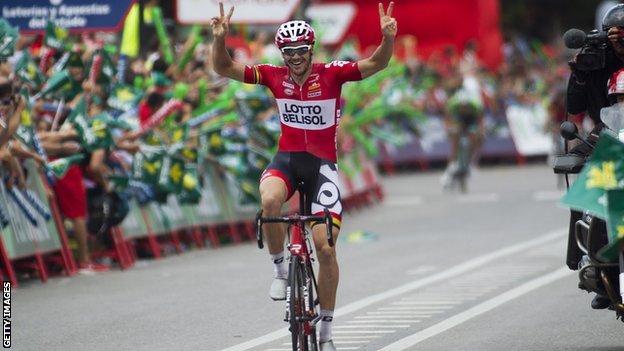 Hansen, 33, led with 4km to go and held off the peloton to win by four seconds from German John Degenkolb, with Italy's Filippo Pozzato third.

Froome finished the 180.5km stage with the same time as Contador to remain 79 seconds behind the Spaniard.

The stage was initially dominated by a three-man breakaway, but, although Wout Poels, Pim Ligthart and Laurent Mangel spent around 140km in the lead, they were never allowed an advantage of more than three minutes and 30 seconds.

They were reeled in with just over 20km remaining as Contador's Tinkoff-Saxo team upped the pace to guard against any attacks, following a day when Team Sky's Froome managed to gain 20 seconds.

As the pack hit the final difficulty of the stage, a 4.7km long category two climb, Astana's Alexey Lutsenko attacked.

But, Lutsenko was never allowed more than 10 seconds over the peloton and, as he crested the Alto Monte Faro, he still had more than 15km to ride and little hope of holding on. With 5km remaining, he was swallowed up.

That allowed Hansen through for his second Grand Tour stage victory.

Meanwhile, Team Sky's Italian rider Dario Cataldo withdrew on medical advice with head and shoulder injuries, after crashing on the descent of the Alto Monte Faro.