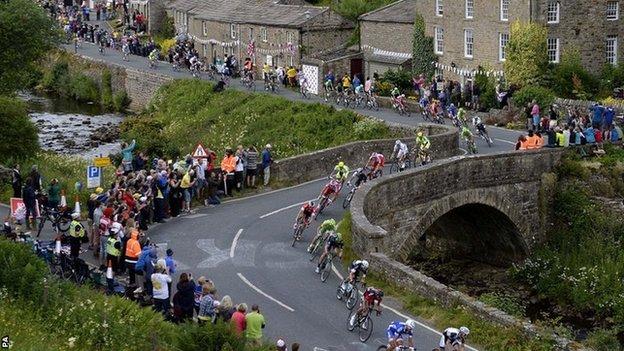 "I can see the Tour in their hearts, and in their eyes. For that, I say thank you to everyone in Yorkshire who has made this Grand Depart so very, very special."

The words of Tour de France race director Christian Prudhomme, who has described Yorkshire's Grand Depart as the "grandest" in the 111-year history of the race.

An estimated 2.5m people lined the route over the weekend as 'Le Tour' took in some of the county's most famous sights and landmarks.

After riders sped through narrow country lanes in the Yorkshire Dales, past the imposing shadow of gothic cathedral York Minster, before ending in the former industrial heartland of Sheffield, Prudhomme hailed a weekend which was "beyond his wildest imagination".

"When you said you would deliver the grandest Grand Depart it was the truth, you have raised the bar for all future hosts of the Tour de France," he added.

After a procession through the streets of Leeds, the 198 Tour riders were met with a warm Royal welcome at 255-year-old Harewood House. There, the Duchess of Cambridge, with the help of her husband Prince William and his brother Prince Harry, cut the ribbon to officially start the race - to the backdrop of French national anthem La Marseillaise. British version God Save the Queen then followed as 't'Tour' began to feel distinctly 'Yorkshire'.

King of the Dales

The biggest climb of the opening stage was given a Gallic twist as plain old Buttertubs Pass became the delicious-sounding Cote de Buttertubs. And fans packed the hillside as they do on the iconic mountain climbs of the Alps and Pyrenees. While it may only be an ascent of 4.5km to a height of 532m, the sight of 10,000 spectators crammed onto the tight road led Prudhomme to gush: "I think the Buttertubs climb can now call itself the Alpe d'Huez of Yorkshire."

The folk of Yorkshire took the French naming of their hills to heart, with Cote de Grinton Moor (pictured) giving an exotic sounding to the landscape. The town of Otley, renamed its pubs and restaurants: The Black Horse became Le Cheval Noir, The White Swan was renamed Le Cygne Blanc, and The Crossed Pipes became Les Pipes Croisees.

From a racing point of view, the biggest story of the weekend was undoubtedly Mark Cavendish's crash on the opening stage. With thousands of people in his mother's home town of Harrogate willing him on to victory, the Briton went for a gap in the sprint finish that he later admitted wasn't there and hit the tarmac. Hard. So hard that for once he didn't bounce.

His Tour over he pedalled forlornly over the finish line to a bigger reception than stage winner Marcel Kittel.

The historic city of York still shows many signs of its Roman and Norman heritage. On Sunday, its restored walls were infiltrated again as thousands of cycling fans gathered for the start of stage two. York Minster even had a yellow shirt on its roof to mark the event.

The Glastonbury of cycling

Holme Moss, a moor on the border between West Yorkshire and Derbyshire on the northern edge of the Peak District, is usually only a place visited by one man and his dog. Not on Sunday. Extra stewards were drafted in as an estimated 60,000 spectators descended on the remote spot, which is 11 miles south of Huddersfield, 27 miles west of Sheffield and 21 miles east of Manchester.

"There are tons of tents in the fields. Never mind a mini Glastonbury - it looks like the real thing," remarked former British cyclist, and BBC Sport commentator, Rob Hayles.

The picturesque West Yorkshire village of Haworth is best-known for being the home of legendary literary sisters, Charlotte, Emily and Anne Bronte. The trio wrote a number of 19th Century novels which are widely accepted as masterpieces of literature - including Emily's Wuthering Heights. And the Tour de France riders had some heights of their own to tackle as they climbed up Haworth's cobbled Main Street midway through stage two.

Sheffield - also known as the Steel City for its rich engineering heritage - was where Le Tour waved farewell to Yorkshire. With the finishing line situated in the heart of South Yorkshire's once-thriving steel industry, it was Italian champion Vincenzo Nibali who showed nerves of steel to burst clear of the pack to win stage two.

Now the event goes down to the south of England before crossing the Channel back to France. So that signals the time for Yorkshire cycling fans to wave farewell to the Tour de France. Or could that be 'Au Revoir'?