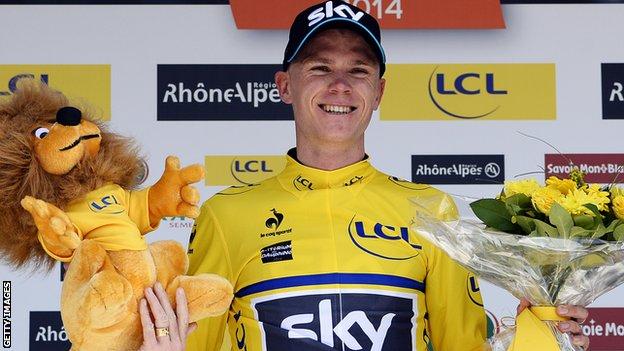 Defending champion Chris Froome set his mark for the Tour de France with an emphatic time trial victory on stage one of the Criterium du Dauphine.

The eight-day stage race is seen as the traditional warm-up for the three-week Tour, which starts on 5 July.

It began with a short, 10.4km loop around the city of Lyon, but Britain's Froome, 29, managed to beat Spain's Alberto Contador by eight seconds.

"I'm here to win the race, we're going to do everything we can," he said.

Tinkoff-Saxo's Contador set the benchmark, but that was eclipsed as Team Sky rider Froome rocketed through the second half of the stage to put time into the field.

Astana's Nibali had been quickest at the intermediate split at the top of the minor climb but, as Froome entered the final metres, it was clear he was riding into the yellow jersey.

Kenya-born Froome won the Dauphine last year ahead of his success in the Tour de France a few weeks later, while Sky team-mate Sir Bradley Wiggins triumphed in both races the year before.

Wiggins has been left out of Sky's Dauphine team this year and will instead ride the Tour of Switzerland, which starts on 14 June.

"I don't think it was necessarily the objective to take the yellow jersey on such a short, flat time trial but I couldn't be happier with the result," added Froome.

"The Dauphine this year is really hard right from the opening stages. I think tomorrow again we can expect a really big race in the mountains."

Monday's second stage is a 156km route between Tarare and the Col du Beal, with a final climb of 13.6km at an average gradient of around 7%.