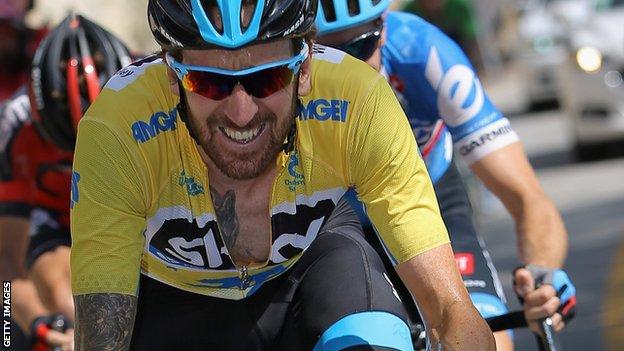 Sir Bradley Wiggins wants to ride the Tour de France after becoming Britain's first winner of the Tour of California.

Wiggins, 34, had previously cast doubt on being part of Team Sky for the Grand Tour he won in 2012 but he now hopes to make the nine-man team, which is set to be led by 2013 champion Chris Froome.

"Sir Bradley Wiggins said his decision to go to California instead of taking another swing at the Giro d'Italia was an 'obvious choice'. But does this win make him an 'obvious choice' for the Tour de France? The short answer is yes. He has proved his form, answered critics and underlined his commercial value. The longer answer will be played out over the next two months. Cycling history is littered with teams that tried to serve two masters. If Wiggins can get his head around this being Chris Froome's team now, Team Sky have gained a formidable plan B. If he cannot, this summer has just got even more interesting."

"If I am fortunate enough to be in the Tour, it will be in support of Chris," said Wiggins who was the first British winner of the three-week race.

The 28-year-old British sprinter, who rides for Omega Pharma - Quick-Step, powered for the line from 200 metres out and won by a tyre's width from Giant Shimano's John Degenkolb to claim his second victory in the eight-stage race. Cannondale's Peter Sagan, 24, was beaten into third.

Wiggins, meanwhile, protected his 30-second advantage over Australia's Rohan Dennis on the final stage, having led for seven of the eight days in California,

Defending champion Froome will expect to be Team Sky's team leader in this year's Tour de France, which begins with two stages in Yorkshire.

The first is a 190km race from Leeds to Harrogate on Saturday, 5 July and is followed by a 200km stage from York to Sheffield.

The Tour then heads from Cambridge to London on Monday, 7 July before continuing in France.

"Chris wants to win his second Tour and, as the defending champion, everyone understands that, including myself," he added.

Wiggins was dominant in California from the moment he won the individual time trial on stage two by 44 seconds.

He carried a healthy advantage into the final day and stayed close to the front throughout the 122km circuit around Thousand Oaks, which included four ascents of the Rock Store climb and finished with three short loops through the city.

Wiggins chose to compete in the ninth edition of the California race rather than commit to the first Grand Tour of the year, the Giro d'Italia, which is entering the second week of its three-week duration.

His decision was vindicated as he triumphed in the sort of soaring temperatures which could be similar to those he may face in France.

Wiggins paid tribute to the support he received from his team.

"I had an incredible team around me," he added. "Without those guys, I would not be in this position. They took the strain all week.

"This win is right up there for satisfaction. I set out my stall to win in California and I have done it now. At 34, it is nice to still be winning."