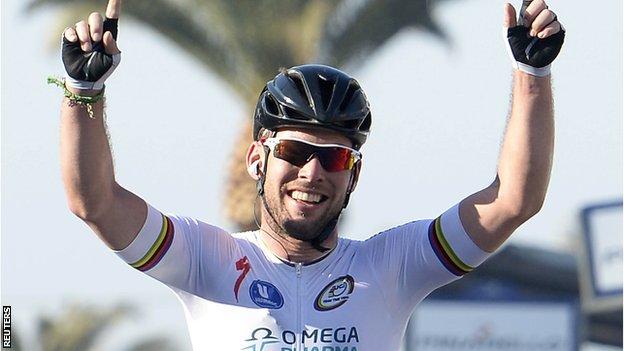 Britain's Adam Yates won the Tour of Turkey as compatriot Mark Cavendish sprinted to victory in the final stage.

Orica GreenEdge rider Yates, 21, extended his lead over Estonia's Rein Taaramae to five seconds on the 121km route around Istanbul.

Cavendish, 28, outsprinted Cannondale's Elia Viviani and Astana's Andrea Guardini in the closing 200m to take his fourth stage of the eight-day race.

"What a day for British cycling: four wins, shared between three very different riders, in the two best races taking place this week - one week before 2014's first Grand Tour starts in Belfast.

"These may be warm-up acts for the headline events still to come this summer, but Chris Froome's time trial and overall double in Switzerland neatly answers any doubts about his form and fitness ahead of the Tour de France.

"So too does Mark Cavendish's fourth win in eight days in Turkey. But it is the overall victory in that race for the 21-year-old Adam Yates that provides the greatest cause for celebration. The Bury-born rider and his twin brother Simon are perhaps now the best (but by no means the only) answer to the question: who's next in the GB production line?"

In Turkey, Yates became the first British winner of the Tour - in its 50th edition - in his first season as a professional.

He kept himself out of trouble after starting the last day with a one-second advantage over Taaramae, who rides for French team Cofidis.

Taaramae shot to the front of the peloton in the closing stages, but slipped back and lost time on Yates.

Although Omega Pharma-Quick Step rider Cavendish is not lining up at the Giro d'Italia, which starts in Belfast on Friday, his success in Turkey suggests he could be hitting form as he looks to add to his 25 stage wins in the Tour de France.

"I'm super happy," the Manxman said. "The team rode incredible all week. We're ahead of where we wanted to be at this time of year.

"I will definitely be back in Turkey. It's a good preparation race and put us in good stead for the rest of the season."