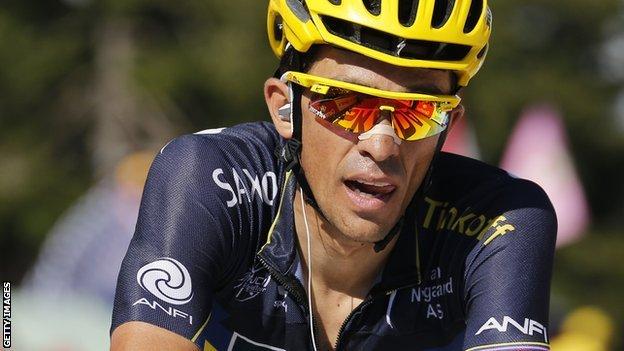 Alberto Contador won a gruelling fifth stage of the Tirreno-Adriatico to claim the overall leader's jersey.

The Spaniard stormed up the final climb of the day, a 610m slope at an average gradient of 22%, ahead of German Simon Geschke and Ben King of United States.

"This winter I was training very hard, now this is the result," said Contador, Tour de France winner in 2007 and 2009.

With two stages remaining Contador has a lead of two minutes and eight seconds over Colombian rider Nairo Quintana.

Geschke was keeping pace with Contador on the ascent of Muro di Guardiagrele, which features gradients of 30% at some points, but the Giant rider had no answer when the Spaniard upped his speed towards the top fo the climb.

It was Tinkoff Saxo rider Contador's second successive stage win and he takes over the race lead from Poland's Michal Kwiatkowski, who finished more than six minutes back and dropped out of the top 10 after finding the day's climbs too tough.