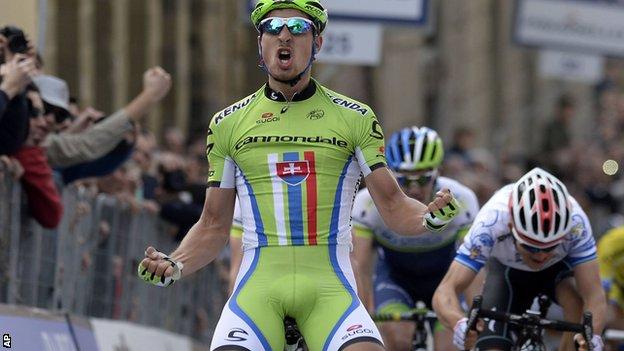 Former world champion Philippe Gilbert appeared to be heading for victory until Sagan surged ahead of him 25m from the line.

"I got excited when I saw this stage was in the race," Sagan said. "I wanted to do well and it went great."

Cavendish, who earned the leader's blue jersey with Omega Pharma-Quick Step in Wednesday's team time-trial and held on to it Thursday, finished 93rd on Friday's stage - 49 seconds down on Sagan.

Polish rider Kwiatkowski finished second on the stage, while Australia's Simon Clarke was third, both with the same time as Sagan.

Sagan, a Slovak who rides for Cannondale, took more than five hours on the 212-kilometre leg from Cascina to the Tuscan town of Arezzo. The stage concluded on an 11-km circuit that featured a short uphill finish, with the last 900m at a five percent gradient.

It was Sagan's second victory of the season, having won a stage in the Tour of Oman last month, and the 57th of his career - many of them on stages similar to this one with short, uphill finishes.

This victory would appear to boost his credentials for Milan-San Remo, the so-called La Classicissima one-day road race, which takes place on March 23.

"I hope so," Sagan said when asked if this latest win could play a part. "We've now entered a very important part of the season."

Stage four on Saturday is the toughest of this year's Tirreno-Adriatico, a 244-km leg from Indicatore to Cittareale Selvarotonda that features several climbs, including a long, gruelling uphill finish.

That stage will give favourites Alberto Contador and Nairo Quintana the chance to make a move on the overall lead. The race ends on Tuesday with an individual time-trial in San Benedetto del Tronto.