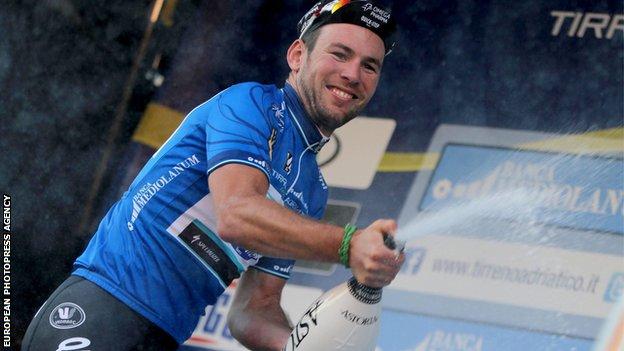 Mark Cavendish retained the overall lead of the Tirreno-Adriatico race in Italy after narrowly avoiding a crash in the closing moments of stage two.

The Manx rider was close behind Marcel Kittel when the German hit the deck with just two kilometres remaining.

Some gentlemen in peloton gave me a hand to move up

Cavendish said: "You saw more than me. I was behind Kittel when he crashed at a narrow little roundabout."

Cavendish held enough of a lead from the team time-trial on Wednesday to stay in possession of the leader's blue jersey despite Kittel's crash blocking the Omega Pharma-QuickStep rider from competing in the sprint. Cavendish eventually came in 17th.

"The peloton split because of it," Cavendish added. "Some gentlemen in the peloton gave me a hand to move up but I got to the front with 500 metres to go, before the sprint even started, and I was already on the limit."

Kittel was fortunate to avoid serious injury in the high-speed crash, but the Giant Shimano rider showed his anger after jumping to his feet by angrily tossing his bike to the ground then collapsing back in a heap at the side of the road.