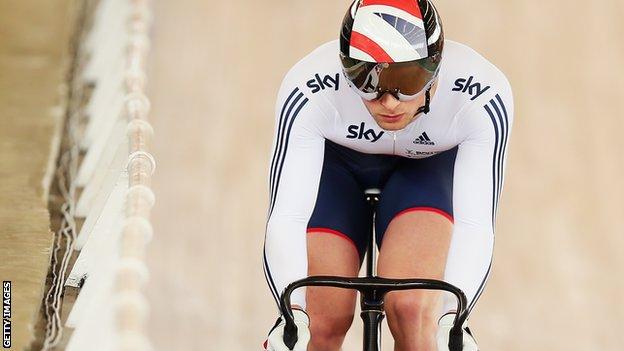 Great Britain's Jason Kenny has failed to win a medal at the World Track Championships in Cali, Colombia.

The 25-year-old sprinter, who has won three Olympic golds - including two at London 2012 - lost in the quarter-finals to Frenchman Francois Pervis.

It meant the Bolton rider, who won the world keirin title in Minsk last year, ended with three fifth-place finishes.

Glasgow teenager Archibald, who earlier won gold as part of the women's pursuit team, was just edged out by Jasmine Glaesser, with the Canadian clinching bronze by winning the final sprint.

Varnish, from Bromsgrove in Worcestershire, lost all four races against her Chinese opposition, beaten 2-0 in the semi-finals by Zhong Tianshi and 2-0 in the bronze medal ride by Lin Junhong.

Ed Clancy finished fifth in the men's omnium, meaning Britain's men will have one last chance to win a medal at the championships on the final day, in the unpredictable Madison through Jon Dibben and Owain Doull.

Olympic champion Laura Trott is well placed at the halfway point of the women's omnium - she is second, but six points behind defending champion Sarah Hammer of the United States - while Varnish, 2013 gold medallist Becky James and Vicky Williamson go in the women's keirin.

On Britain's men not having won a medal so far in Cali, Clancy - at 28 the senior squad member - said: "This whole track campaign (the season) hasn't been a bad one. We've had some great results, great performances, just not this week.

"Truth be told, this whole week's been a bit of a nightmare."

Clancy was a member of the team pursuit squad which finished eighth on day one in the worst British result in the event in more than 15 years.

He added: "Back to the drawing board and we'll try to sort it out next year."