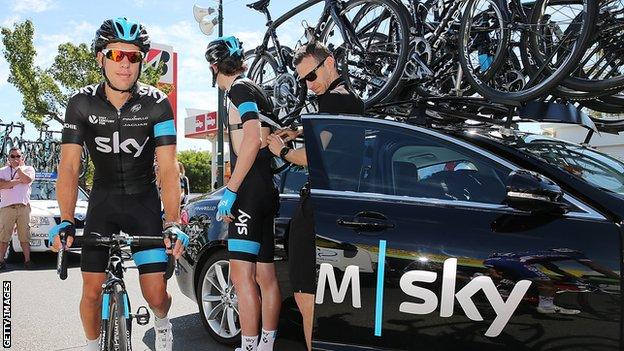 Team Sky had to borrow a bike from a rival team for this weekend's Tour du Haut Var after 16 of their own were stolen on the eve of the race.

The British outfit, missing both Chris Froome and Sir Bradley Wiggins, have a youthful team for the two-day race.

Froome is at the Tour of Oman, while Wiggins and Richie Porte are competing in the Ruta del Sol in Spain.

It's been a great team effort

The team's mechanics woke on Saturday to find their support vehicle had been broken into at their hotel in Trans-en-Provence.

Race coach Stephens told the team's website: "The thieves took all the bikes, bar two. They also took some of the spare training wheels and various bits of other equipment.

"We're still able to take part in the race though and seven of our eight riders will be riding team-issue Pinarellos.

"The two that were left in the van are going to be used and we managed to source five others from our training house in Nice so fortunately the show goes on."

Stephens said the team's mechanics had done a "tremendous job" getting the bikes ready for the race.

He added: "It's been a great team effort in general.

"The remaining bike we've been able to borrow from the Bretagne-Seche Environnement team, who we've been sharing our hotel with.

"That was a really nice gesture from them and we appreciate it a lot. We can't thank them enough."