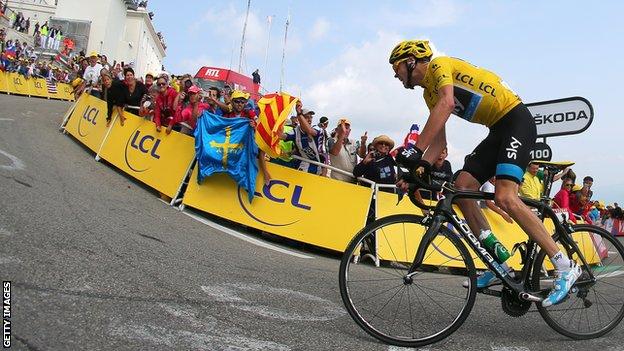 Chris Froome said he is pleased to be starting the defence of his Tour de France title in Britain, on the day the 2014 route was revealed.

The Team Sky rider, 28, became the second Briton in a row to win the crown after Bradley Wiggins's 2012 victory.

Froome said having the race begin in Leeds "feels like a real privilege".

The 101st Tour will include five mountain finishes, one individual time-trial and nine cobbled sections on stage five in northern France.

It will start in the Yorkshire city on 5 July, one of two stages in the county, before the riders race from Cambridge to London prior to the French stages.

"I was bowled over at the support we had in France so I can only imagine what it is going to be like over in Yorkshire," Froome added.

"It is going to be massive. It certainly gives a little bit of added pressure too I'm sure."

Meanwhile, the Briton said the cobbles in northern France would be "a bit of a risk" for the riders, but provide for an intriguing race.

"For us as riders, it's a bit of a risk - there are accidents and mechanical problems that could happen - but it will make the race exciting and begin sort the race out at an early stage."

Tour director Christian Prudhomme said: "Uncertainty is part of the competition. It would not make sense to avoid the cobbles when we go through northern France."

Froome added that he was happy to see the reappearance of a summit finish on La Planches des Belles Filles on stage 10 - the first of five major summit finishes.

"It was a very special day for me winning at La Planches des Belles Filles in 2012," he said, with eventual champion Wiggins taking yellow for the first time in that edition.

"I'll get a special feeling going back there again next year. It's going to be the first summit finish again - which it was last time - and I think that always marks quite an important day for the general classification riders."

It will be the fourth time the race has visited the UK and the first time since 2007, when a Westminster prologue was followed by a stage through Kent. Previous visits came in 1974 and 1994.

The opening stage to Harrogate is expected to end in a sprint, giving Mark Cavendish - who has 25 stage wins in the Tour - the chance to take the race leader's yellow jersey in his mother's home town.

"I'm super excited about the first stage coming to Harrogate," said the 28-year-old. "I still have a lot of family there and it gives me an opportunity to wear the yellow jersey in front of my fans, so to dream of that is a big thing."

The second, hilly stage is from York to Sheffield and could open up gaps in the general classification standings, before another stage expected to end in a sprint, from Cambridge to The Mall in central London.

Welcome To Yorkshire chief executive Gary Verity said he expected more than a million people to attend the stages in Yorkshire.

"I would think that would be the minimum - probably closer to two million, that will depend on the weather," he said.

"People will realise it is a once-in-a-generation thing and they will turn out in big numbers."

Soon after it leaves Britain, the race will arrive in Ypres, to commemorate the 100th year since the start of World War One.

The Tour will then head to some unfamiliar climbs in eastern France before heading down to the Alps and across to the Pyrenees before the penultimate stage - a 54km individual time trial between Bergerac to Perigueux, which could decide the winner of the Tour.

The 21st and final stage will finish, as per usual, at the Champs-Elysees in Paris.