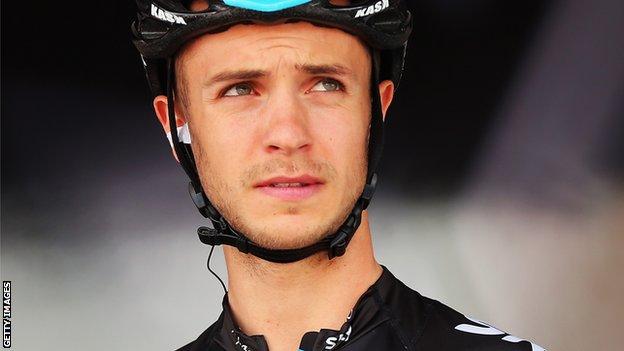 Team Sky cyclist Jonathan Tiernan-Locke has been notified of a potential discrepancy in his "biological passport data" by the sport's governing body.

The Sunday Times reported that he has been asked by the International Cycling Union (UCI) to explain suspect blood values.

Team Sky said the 28-year-old Briton has withdrawn from racing "whilst his response to the UCI is prepared".

Tiernan-Locke pulled out of the Road World Championships on Thursday.

The 2012 Tour of Britain winner, who joined Team Sky in October last year, cited a lack of form as the reason for his withdrawal after the decision was announced.

The Sunday Times article stated that the suspect blood values dated back to September 2012.

"We have no doubts over his performance, behaviour or tests at Team Sky and understand any anomaly is in readings taken before he joined the team," Team Sky added in its statement.

A cyclist's biological passport is an electronic record in which the results of all doping tests over a period of time are collated.

It contains the results of an individual's urine and blood tests.

New UCI president Brian Cookson told BBC Radio 5 live's Sportsweek: "It's important that it [the inquiry] is handled properly and with integrity under the processes that are laid down. I certainly won't be interfering in it.

An individual, electronic record for each rider, in which results of all doping tests are collated. Passport for each rider contains:

"I am concerned that it's leaked out because I don't think this information should be in the public domain while someone is being questioned. That's not the same at all as them being guilty and let's see what happens."

In September last year he became the first British rider since 1993 to win the Tour of Britain.

He is believed to now have three weeks to reply, with Team Sky urging that he be allowed to do so "in private and without prejudice".

A British Cycling spokesman added: "It is not our policy to discuss individual cases until they are concluded and all appeals heard. Until then, information is considered personal and confidential and its release is absolutely at the discretion of the athlete.

"We remain committed to respecting what should be a confidential process which allows the anti-doping authorities to do their job in the right way and an individual the chance to explain privately and without prejudice."