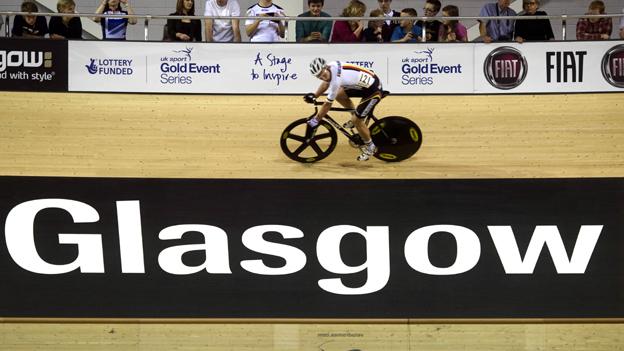 Scottish Cycling's performance director Gary Coltman admits "medals have been tough to come by" at the British Track Championships in Manchester but believes the team is progressing.

"Katie did a great ride in the individual pursuit and got a medal for third place," he said.

"She was a junior champion last year; now in her first year as a senior she has really made a mark and a lot of people have noticed."

While there have been no gold medals for the Scots, Coltman believes that can be explained by the standard of opposition at the Manchester Velodrome.

"For quality, it's probably better than any national championship anywhere else in the world," he said.

"It would be challenging the standards of a World Cup because of the level of riders we've got in the UK now.

"And because it is a non-Olympic year they are all here fighting it out for medals."

Coltman added that the keirin final, which featured a brace of Scots, "was a real quality field".

We're up for the challenge - we definitely have the ability

"There were two Scottish riders in there - John Paul and Callum Skinner; no medals but we're crowding the front of the races," he said.

"To actually be right up there in the racing shows well for the riders coming through."

Paul and Skinner finished sixth and fourth respectively in the men's keirin which was won by world keirin champion Jason Kenny.

The British Championships are, of course, a major event in their own right but for the Scottish riders competing in them they represent a chance to make the qualification standards for a place in the Scotland team for the Commonwealth Games in Glasgow next year.

Coltman believes three cycling medals for Scotland at the Games "would be a great target".

"We've got realistic targets for the Games," he said.

"We've had para-cycling medals here as well and that's something we'll be strong in at the Games as well.

"David Millar won the time trial in Delhi and he is very keen to defend that in Glasgow.

"There are lots of chances [for track cycling Games medals]; some of the races are quite tactical so it just depends how things fall for you on the day.

"We're up for the challenge. We definitely have the ability.

"We want success at the Games and good plans in place to bring the next generation through and I think that would be looked upon positively by the funders so we can strive towards those next Games as well."