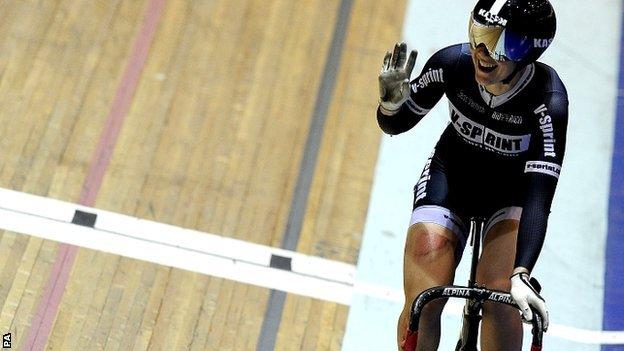 Jess Varnish and Laura Trott each won their second gold medals of the week at the British National Track Championships in Manchester on Friday.

Varnish saw off Victoria Williamson and Katy Marchant as she took sprint gold, while Jason Kenny won the keirin.

"I'm really happy with the sprint win because it's been something I've been working on," said Varnish.

"It was really hard, it was a tough race," said Trott, who also won the pursuit title on Thursday.

"It's not like a pursuit, that's predictable, but in the points people use different tactics so you never know what's going to happen."

Trott, King and Barker will team up with Joanna Rowsell for the team pursuit on Sunday as they ride in the event as a four for the first time.

Kenny beat Matt Crampton to win the keirin, and said: "It was nitty gritty on Matt's wheel in third place. I was just happy to hold station knowing Matt was one of the race favourites."

Sam Harrison lapped the field as he beat Ed Clancy and Steven Burke in the scratch race.