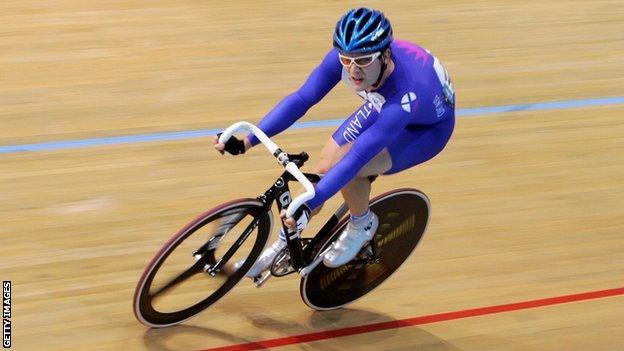 There will be more than 20 Scottish riders at this week's British Cycling Championships in Manchester.

Among them, Charline Joiner and Jenny Davis will compete in the 500m time trial and Joiner and Katie Archibald chase 3000m individual pursuit success.

City of Edinburgh Racing Club cyclists Callum Skinner and John Paul will race in the keirin on Friday and the sprint event on Saturday.

Evan Oliphant will compete in the points and scratch races.

The 31-year-old Team Raleigh rider has just finished competing in the Tour of Britain and he will be up against his friend and Scotland team-mate James McCallum (Rapha Condor JLT), who will also race in the omnium.

"We have a Scotland team featuring John Paul, Bruce Croall and Jonathan Biggin riding in the team sprint this year, which has not happened for quite a few years. If everything goes right on the day, we should get a medal.

"We're seeing some great times from John in training so hopefully he'll carry that in to racing.

"As for Evan, he is a really good rider, and if anyone can come off the Tour of Britain and go straight on to the track nationals, it's him."

Skinner, who hopes to represent Scotland at the Commonwealth Games next year, is defending his British sprint title.

"It was probably one of my best achievements last year, so to be able to hold on to that or even be close to it would be a great thing," said the Glaswegian.

"The Commonwealth Games is also a big target for me. I want to hit that event full on. With ticket sales having drawn to a close, it seems like it is really on the horizon now."

Louise Borthwick (Edinburgh RC) will be joined by Eileen Roe (Breast Cancer Care Cycling Team), Archibald and Joiner in the points and scratch race. Baird, Davis and Haston will also be lining up for the women's keirin.