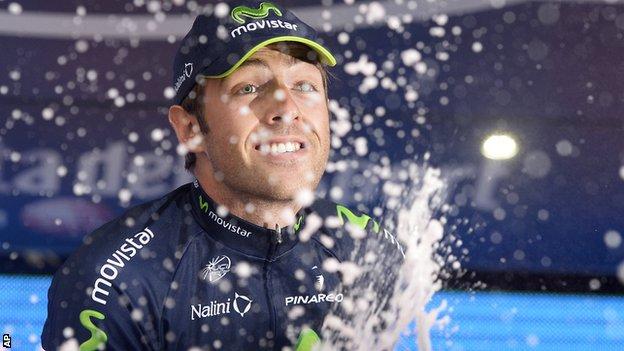 The pair are among the favourites on the Florence time trial course, along with last year's winner Tony Martin.

"I think it's going to suit Tony Martin. But it's got Brad's name written all over it," Maldon's Dowsett told BBC Essex.

"I think he's more than capable of winning this."

Olympic time trial champion Wiggins, 33, has never won the discipline at a world championships, with his best finish a silver in Copenhagen in 2011.

Dowsett, who used to ride with Wiggins in Team Sky before moving to Movistar last year, has emerged as a major rival to the 2012 Tour de France champion this year, after claiming the first stage victory of his career during the Giro d'Italia and claiming a third consecutive British time trial title.

But illness hampered his Tour of Britain chances, and he could only finish fifth in the time trial.

"The Florence course is long stages of plain, flat road and you really have to concentrate on keeping speed high and your power output. It suits the pure time triallists," said the 24-year-old.

"I seem to have been able to perform on every type of circuit.

"It will be fine for me. There's nothing that will give somebody a distinct advantage over me or vice versa."

Dowsett's stage win in the Giro, his Grand Tour debut, was 10 seconds quicker than second-placed Wiggins and has increased the expectancy on the former European Under-23 champion ahead of the worlds.

"There's always a bit more pressure," he said. "Certainly going into the Tour of Britain, TT people were talking about me versus Wiggins.

"I've always been an up-and-coming youngster. It's a bit different going into a race as a sort of favourite. It's something I've got to start getting used to."