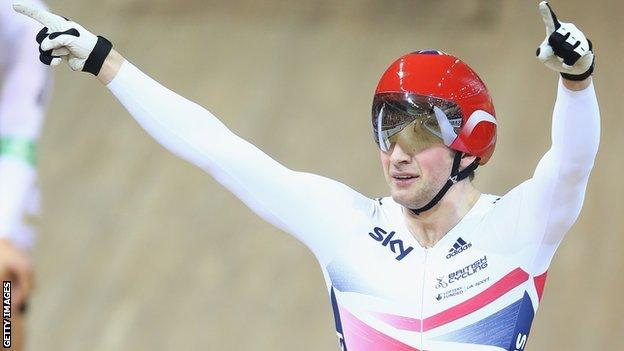 Olympic and world champions Jason Kenny and Laura Trott are among the riders competing at this week's British National Track Championships.

Kenny, 25, won the men's individual and team sprint gold at London 2012, while Trott, 21, won women's omnium and team pursuit gold at the Olympics.

Manchester Velodrome hosts the five-day event, which starts on Wednesday.

Overall, British cycling says there are 142 world medals between the competing riders.

Kenny will face strong competition in Saturday's sprint, especially from Olympic team sprint team-mate Philip Hindes, as he returns to compete in an event he took a break from last year.

Callum Skinner won the discipline in 2012, while Lewis Oliva, Kian Emadi, Matt Rotherham and Matt Crampton are also vying for the title.

Sunday's women's team pursuit will be a four-person, four-kilometre race for the first time and Trott, Dani King and Joanna Rowsell - who won Olympic gold when the event was a three-woman, three kilometre race at London 2012 - will add Elinor Barker to their set up.

Barker is a member of the same Wiggle-Honda road race team as her colleagues and partnered Trott and King in winning gold at the track World Championships in Minsk in February.

However, double world champion Becky James, who won four titles at last year's event, will not be competing.

But double junior world champion Danielle Khan and Jess Varnish will be among those contesting the women's sprint crown, with the pair also joining forces for the team sprint.

"I am still focussing on man one in the team sprint since getting back from injury but I'm also focussing some attention on the sprint because they can go quite well together," Varnish told British Cycling.

"I want to do well in the individual sprint. In the competitions later in the season, that's an area where I am really looking forward to seeing how I get on."