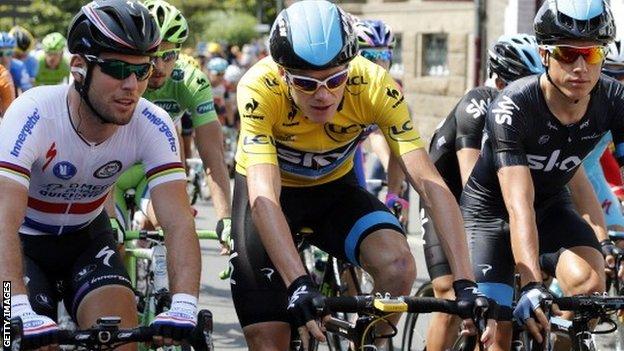 Cavendish will support his team-mate as Froome attempts to become the first man in 24 years to win the Tour and world road race in the same year.

"I've based my training in the last month around going well at the World Championships," said the 28-year-old.

"We're going with one plan, to set Chris up. He has a super chance."

The men's race on Sunday covers 272.5km of Tuscany and includes two difficult climbs, in San Domenico (4.3km) and Via Salviati (600m)

Should Froome succeed in Florence he will become the third Briton to win the road race world title, following Tom Simpson (1965) and Cavendish (2011).

The tough climbs should suit Kenyan-born Froome and Cavendish has high hopes of helping the Briton emulate American Greg LeMond - the last man to win both the yellow and rainbow jerseys in the same year after achieving the double in 1989.

"If we didn't think he had a really good chance, we'd be going in with more than one plan," added Cavendish.

"It's a hard course. He's in good form. He's won the Tour de France and we've got eight guys. We're in a good position to try to challenge for the win."

Cavendish secured his third win of this year's Tour of Britain on Sunday, taking his tally of race victories in the event to 10 since 2007.

The Manxman said the Tour of Britain was ideal preparation for the World Championships.

"Just seeing the amount of people out, it's near on a certainty it's going to grow in terms of UCI ranking," said the Omega Pharma-QuickStep rider.