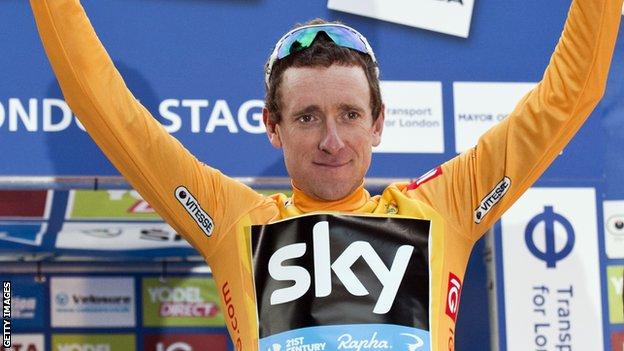 Former Olympic gold medallist Chris Boardman says Sir Bradley Wiggins will be near his best at this week's Road World Championships after getting "a good kicking" so far this year.

Injury and illness meant Wiggins had to drop out of the Giro d'Italia in the spring and missed the chance to defend his Tour de France title in July.

Boardman said: "Brad's had a turbulent year, but he needed it.

"Nothing motivates winners more than a good kicking."

17 May - withdraws from the Giro d'Italia due to illness

22 September - wins the Tour of Britain

Wiggins showed a return to form as he won the Tour of Britain on Sunday and will compete in the elite men's individual time trial at the Road World Championships in Tuscany, Italy on Wednesday.

Boardman, who won Britain's first Olympic cycling gold for 72 years at Barcelona in 1992, reckons Wiggins will be in better shape after this year's disappointments and is in good condition to compete in Florence.

"It certainly looks like he's seen the light at the end of the tunnel after the Tour of Britain," Boardman said.

"At the Tour of Britain he looked better and looked in the right frame of mind. The world championship time trial has come at the right time.

"Disappointment is the biggest motivator for successful people and he's had a healthy dose of that this year."

In 2012 Wiggins became the first Briton to win the Tour de France and won his seventh Olympic medal with time trial gold in London.

But Boardman reckons he struggled with increased expectations following his success.

"When you're hungry and you eat, you're not hungry any more", said Boardman. "Everything he aimed for he got. But then there's the realisation that next year the slate is wiped clean.

"Everyone else has got much bigger expectations. When you're on the top step, you either win or you fail. There is no second place any more and that's a wholly different type of pressure."