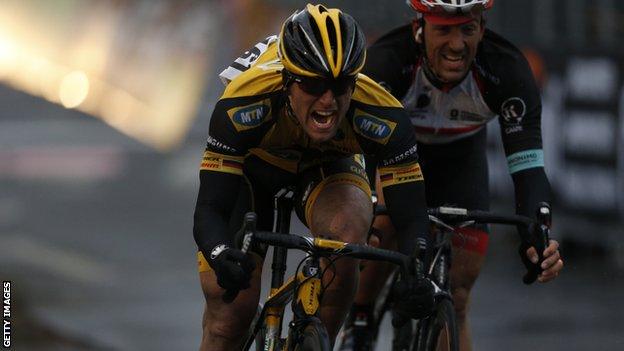 Sir Bradley Wiggins survived a crash on a rain-soaked day in the Lake District as Gerald Ciolek won stage two of the Tour of Britain to take the lead.

Team Sky leader Wiggins landed on top of Italian rider Giovanni Visconti, who crashed in front of him on a descent while travelling at more than 30mph.

Heavy rain made the road treacherous for much of the 186.6km stage, which started in Carlisle and saw the riders ascend Honister Pass, which features gradients of 24%.

Nairo Quintana, the runner-up to Chris Froome at this year's Tour de France, attacked the peloton on the climb with Ireland's Dan Martin but they were unable to open a significant advantage as Sky controlled the peloton as the race rolled towards the finish.

Martin later tweeted: "Got cold sitting in the peloton so decided to have a play. Thanks to Nairo for coming with me. Somebody has to try break Sky."

Britain's Mark Cavendish, riding for Omega Pharma Quick-Step, darted out in front of the leading group with 10km left but he was quickly caught.

Sweden's Thomas Lovkvist made a more sustained effort to win the stage but he was caught by Ciolek, who then edged out Bennett.

British under-23 rider Simon Yates finished fourth on the stage, behind Lovkvist, to move up to second overall.

Wiggins finished 17 seconds behind Ciolek and is 12th overall, 30 seconds adrift of the overall leader.

The 10-mile race is expected to favour Olympic time trial champion Wiggins, while fellow Briton Alex Dowsett, who is one second further back, will also be aiming to win the stage.

Movistar rider Dowsett has won the British time trial championship for the past three years and beat Wiggins to win an individual time trial stage at the Giro d'Italia earlier this year.

Martin, one of the race favourites, is acutely aware of the damage Wiggins and Dowsett could do on the flat time trial course.

"If I do the time trial of my life, I'd still expect to lose a minute," said the Garmin-Sharp rider.